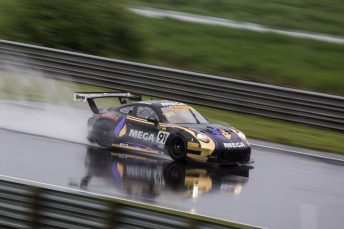 Liam Talbot and John Martin head into this weekend’s final round of the Australian GT Endurance Championship at New Zealand’s Highlands Park circuit some 53 points off the Championship lead.

The MEGA Racing duo are looking to bounce back from a fourth position at the previous round, the pair using all of their international experience to salvage the position from what could have been a lot worse after a mechanical gremlin snuck into their Porsche 911 GT3-R

This weekend’s event takes on the challenging Highlands Park layout.

Whilst it has presented difficulties having the car based in New Zealand since the Hampton Downs event, the Walkinshaw GT3 outfit have shown their typical meticulous approach in ensuring the MEGA Racing machine will be right to go once first practice hits the track on Friday morning.

The brainchild of Australian GT Championship owner, Tony Quinn, Highlands Park – near Queenstown – is one of the longest tracks in Australasia and one of the most difficult with Quinn taking sections of the world’s best racetracks to come up with the Championship layout.

Both Martin and Talbot have experience at Highlands – the former looking to bounce back from a crash that eliminated the Walkinshaw GT3 prepared Porsche from competition early.

The Queensland duo are buoyed by the performance of Jason Bright – also backed by Australia’s newest Petroleum company, MEGA Limited – who scored his best finishes and first top five of season 2017 in the Virgin Australia Supercars Championship last weekend in Pukekohe.

“The Championship with the format and pointscore is still all to play for this weekend. In many ways, the pressure is off John and I.

“We’ve shown the speed and consistency between the two of us as drivers – and hopefully got all the bad luck out of our system!

“It is a phrase I use a lot but Highlands Park is a risk and reward circuit – there are many ways it can bring you undone.

“John and I are absolutely up for it, we can’t wait to get over there and get into it – we’re the chasers, we’re hungry and we’re going to do everything we can to get Championship for the guys at MEGA and reward the boys at Walkinshaw GT3.”

“I feel like there is some unfinished business at Highlands Park after last year – and in this Championship after last round.

“We know we’ve got the ability, consistency and machinery to get this done. As Liam said, the pressure’s off us, but it doesn’t mean we’re not going full throttle to bring the Championship home.

“It is always fun at Highlands, I’m sure Mother Nature will cast her hand over us as well – but bring it we’re ready!”