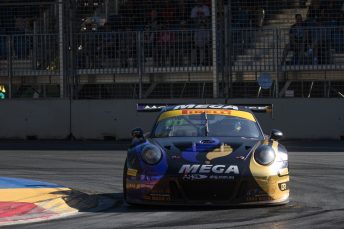 MEDIA RELEASE: Liam Talbot has ended a wild third race in the CAMS Australian GT Championship at the Clipsal 500 in fifth placing aboard the MEGA Racing Porsche 911 GT3 R – which placed him fourth for the weekend overall.

The race was brought to a halt after a lap one incident forced officials to repair damage to the turn eight wall.

Upon resumption, Talbot was locked in a battle for fifth place in the Walkinshaw GT3-prepared machine.

With pitstops placing him further down the field, the Brisbane-based racer was on the charge against the competition.

He was soon placed in a three way battle for the top five. Showing his European experience, Talbot was making his moves with great calculation.

The Blancpain Endurance Series Champion showed tenacity in the way he was moving the MEGA Racing Porsche through the field, however was involved in a late race collision with another competitor.
Drawing on his full ability, Talbot managed to avoid a heavy incident and carried on to the end of the race.

The final lap saw Talbot have the McLaren of factory driver, Come Ledogard pressuring him, however the MEGA Racing Porsche held strong to take the fifth placing.

This positioned Talbot fourth for the round and in good shape heading to the next round of the CAMS Australian GT Championship, which will be at the Formula 1 Rolex Australian Grand Prix over the weekend of 23-26 March.

QUOTEBOARD – LIAM TALBOT:
That was a wild race out there…

“It was a bit of chaos out there! The race got under way and unfortunately one of our competitors had a big crash at turn eight, so I wish him a speedy recovery.

“We pitted the MEGA Racing Porsche to try and gain some track position, but unfortunately ended up in traffic.

“Then towards the end, it was a bit of a perfect storm, three cars don’t fit into two – I don’t really remember what happened but all I know is I had nowhere to go and did what I could to keep it off the wall.

“You never want to see damage on these cars.”

“The car was strong enough to keep the McLaren behind me, it was OK – I wasn’t sure how it was going to be after the incident, but once I knew it was OK, I continued to press on and preserve the position and salvage the points.

“Overall, it is disappointing for the team, we don’t come here to try and salvage points.”
Fourth for the weekend, a pleasing way to start the season with MEGA Racing…

“That was a silver lining after today’s action to end the round fourth, it is pleasing to have the pace on board the car.

“The Walkinshaw GT3 team did a really good job with the preparation and setup. We barely made an adjustment on the car throughout the weekend – it was simply MEGA!

“The car was unbelievable to drive and every lap was a real privilege – I had to just about pinch myself each time I got out of it, it was an honour to drive this car – it was just amazing.

“Now onto the Grand Prix and the next round, we’ll continue pushing to get the MEGA Racing Porsche up the front!”