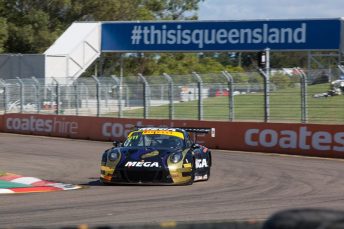 Australian GT Championship leader, Liam Talbot is feeling good after the opening practice session for the Series at the Watpac Townsville 400, which saw him end up with the fourth quickest time.

Although a quiet day with only one on-track session in the MEGA Racing Porsche 911 GT3-R, it was anything but during the frantic 20 minute session.

It was an opportunity to bed in fresh components, learn the circuit as well as prepare the car for the two qualifying sessions and the three 40 minute races.

Talbot has never seen the Reid Park layout before today and was among the front-runners right throughout the session.

His off-track training in both fitness and on the SimworX Simulator are expected to come to the fore tomorrow when he faces two qualifying sessions and a 40 minute race.

Talbot commented that it was hot in the cabin of the Walkinshaw GT3-prepared rocketship. Temperatures today have hit 27 degrees with high humidity – conditions are expected to remain like that throughout the remainder of the weekend.

Tomorrow, action starts early at 8:30am for first qualifying, second qualifying at 10:25 and the race at 2pm.

The Queenslander – who last year won the Blancpain Endurance Series in Europe – currently leads the Championship by 28 points with two rounds to go.

The weekend’s activities are shown live on Fox Motorsport, channel 506.

“It’s been a really good start to the weekend, today was my first time to the circuit, we’ve worked hard before the event on the simulator and watching on board footage, which is now paying off, the car is in a really good spot and we only just got pipped for third at the end of the session.

“Throughout today, we were bedding in new components on the MEGA Racing Porsche, so there is a bit more time to find, today’s aim was to get up to speed and learn the track – Walkinshaw GT3 have the car in a very good window where it is right now.

“The Reid Park circuit is awesome, I love it. The curbs make it interesting and part of today was learning which ones to touch and which ones to avoid! It is somewhat unusual in a GT car to straddle the curbs, but it is a lot of fun as well.

“The car bottoms out over the highway section, with the downforce, it is quite planted.

“We’re in a great place at the moment, tomorrow is a very busy day and we’re as ready as we possibly can be!”