Take Two for Round Three

Take Two for Round Three 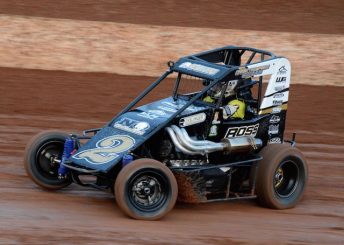 MEDIA RELEASE: Having suffered a washout at the first attempt to run this event two weeks ago, a rescheduled round three of the Polar Ice Midget Track Championship will be contested at Ausdeck Patios Archerfield Speedway this Saturday night (December 17).

The always spectacular Dirt Modifieds – no doubt desperate for some laps after suffering three rainouts in a row including their Queensland Championship event – are also on the program, along with Compact Speedcars, Modlites and Ford v Holden v Sigma sedans.

Despite the postponement, the field for the Polar Ice Midgets remains strong with 20 drivers from Queensland, interstate and overseas amongst the starters, including three-time national champ Adam Clarke.

Last month, Clarke won the opening round of the Midget Super Series at Archerfield and will arrive back in Brisbane fresh from a win in round three of the series in Sydney last weekend.

However, also in the field this Saturday will be New Zealander Chris Gwilliam who won the second round of the Super Series at Lismore and the previous round of the Polar Ice series, setting the scene for a terrific trans-Tasman showdown.

Sydney’s Nathan Smee and another NSW-based driver in Adam Wallis are also competing this weekend and both will have every intention of parking atop the podium at the conclusion of the feature race. Smee has an outstanding record of success at Archerfield (and elsewhere), whilst Wallis has proven a dab hand in numerous racing categories.

Of course, the field also includes Queensland’s best Midget exponents, including former state champ Rusty Whittaker and regular Polar Ice front runners such as Darren Vine, Troy Ware and Brock Dean, plus a couple of drivers making the step up from other categories in Charlie Brown (Formula 500’s) and Darren Dillon (Compact Speedcars).

The 2016/2017 Polar Ice Track Championship has thus far produced some outstanding competition and, with the Australian Championship and World Championship events scheduled for Archerfield for later this season, every driver should be plenty motivated to secure a place on the podium

Australian Dirt Modified champion Kevin Britten will make his first belated Brisbane appearance for the season and his first outing since his narrow runner-up finish to Tim Morse at the New South Wales title in Lismore.

Until his Lismore loss, Britten held every state title in addition to his national crown and he will be out to reassert his authority come Saturday night.

As with the Midgets, the postponement of the event has had minimal impact on nominations with 17 cars entered. Leading the bid to beat Britten will be two national championship winners in Andrew Pezzutti and David Clarke, a couple of experienced racers and a bunch of rising stars desperate to make their mark.

Scott Conlin and Gary Wathen have enjoyed long associations with the Dirt Modified category and are proven winners, while the likes of Mitchell Randall, Nick Knott, Sam Bruggy and Trent Scofield and Dallas Czerwinski should be well placed to take advantage if the top guns falter.

Gates open at 4.00pm, early racing kicks off at 4.45pm and the main program featuring Dirt Modifieds and round three of the Polar Ice Midget Track Championship gets underway from 6.00pm. For more information, head to the track website at www.brisbanespeedway.com.au or follow Archerfield Speedway on Facebook.