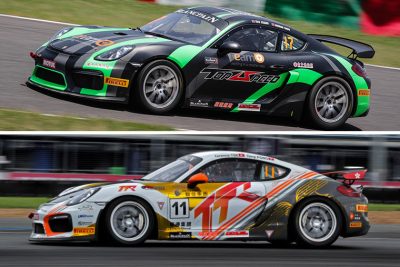 That brings the total number of confirmed GT4 entries to five, with more teams and manufacturers expected to commit before the opening round at Sepang in Malaysia on April 14/15.

Team manager Glavin Huang believes returning to the class with a stable line-up offers Taiwan Top Speed an advantage over its rivals.

“As one of the founding members of Blancpain GT Series Asia’s GT4 class we are delighted to see the category growing stronger in 2018 and can’t wait to be a part of it once again,” he said. “We expect the competition to be tougher this year but, with a season already under our belts plus a driver who knows the car and circuits, we’re confident of mounting a strong challenge. Keo proved to be one of the quickest drivers last year and I expect him to be fighting for wins once again.”

TTR Team SARD is also returning for its second season in the class after scoring two podiums in 2017. Tony Fong is back to lead a line-up that now features Taiwanese driver Brian Lee, who has spent the past two seasons competing in Porsche Carrera Cup Japan. He also raced with HubAuto during a one-off outing in Blancpain GT Series Asia’s GT3 class at Shanghai last season.

“The team and I learnt a lot in 2017 but we’re back and keen to make an impression this season,” said Fong. “Brian has been racing Porsches for the last two seasons, and although the 911 is different to the Cayman, I expect he’ll be up to speed very quickly. I’m sure the GT4 class will prove very competitive this year but we are ready to take a step forwards and challenge for podiums on a regular basis.”

Further GT3 and GT4 announcements are expected in the coming weeks.