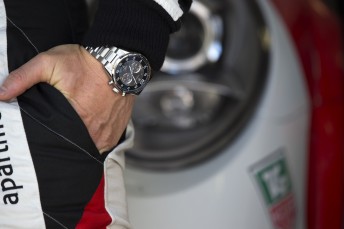 Iconic Swiss watchmaker TAG Heuer has extended its partnership with Porsche Carrera Cup Australia for the next two seasons, increasing its involvement in the sports car championship to the end of 2016.

A significant change in the championship will be the re-introduction of the TAG Heuer Carrera Challenge, formerly running throughout the 2004-2007 seasons.

Known as the Elite Class over the past four seasons, the TAG Heuer Carrera Challenge is a race within a race, which solely recognises the semi-professional drivers in the Porsche field.

With its renowned timing expertise, TAG Heuer retains the naming rights for the Fastest Lap and Pole Position awards, and the new agreement will see a larger prize pool of TAG Heuer products for the championship’s quickest competitors from both classes.

“TAG Heuer has been a tremendous supporter of Porsche racing in Australia and we’re truly excited to continue this fantastic association with the brand,” said Porsche Cars Australia’s Motorsport Manager, Kurt Sakzewski.

“Our brands share many of the same values and hold such a strong presence in our respective markets, not to mention our respective ‘Carrera’ models and strong links through our past motorsport involvement.

“We’re also excited to return the TAG Heuer Carrera Challenge title to Porsche Carrera Cup competition featuring the championship’s semi-professional racers, who are a core element of Porsche racing both in Australia and globally.”

“TAG Heuer’s intense passion for motor racing has fuelled our technical innovation and performance since the earliest days of the brand” says Mr. Richards. “Through our continued partnership with the Porsche Carrera Cup Australia, TAG Heuer is looking forward to writing yet another new page of its rich motor racing history.”

Porsche Carrera Cup Australia will hold eight events for the 2015 season, which begins at the Clipsal 500 in Adelaide on February 26 to March 01, 2015.