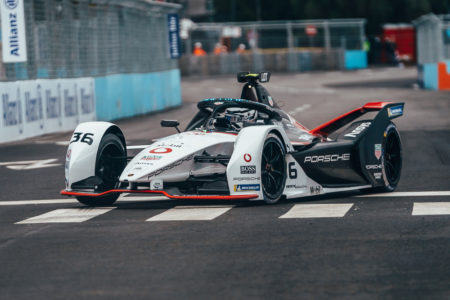 After a strong performance in Rome, where Pascal Wehrlein (GER) secured the first podium result of the season in the Porsche 99X Electric, the TAG Heuer Porsche Formula E Team wants to underscore its positive progress with another top result in Valencia. On the Circuit Ricardo Tormo near the Spanish city, races five and six of the ABB FIA Formula E World Championship will be contested on 24 and 25 April. “We’re making progress and we’re learning new things every race weekend,” says Amiel Lindesay, Head of Operations Formula E. “What we can expect at the moment are podium finishes. What we want are wins.”

Before the season began, the twelve teams and 24 drivers contesting the world’s first electric racing series held the official winter test on the Spanish racetrack. Now, they will race there for the first time. The TAG Heuer Porsche Formula E Team, which currently ranks fifth in the team classification after the first four races of this season, will tackle the premiere at Valencia with two Porsche 99X Electric. In the cockpit of the two vehicles are Pascal Wehrlein (#99) and André Lotterer (GER/#36).

There are just two weeks between the races in Rome and Valencia. What did you do during that time?
“There was no time to take a break. We took our learnings from the race in Rome, we analysed what went well and what didn’t go so smoothly and we’ve taken a big step in improving the efficiency of our car. There is obviously more potential in the Porsche 99X Electric than we’ve been able to demonstrate so far. We have to explore this potential and make sure we can fully utilise this during the entire race weekend. Our car is one of the quickest in qualifying, and we have the race pace too. There are a few details we need to bring together. When these are pieced together, we can win races.”

What needs to improve in Valencia compared to Rome?
“This is only our second season and we’re still learning new things at every race. That’s racing. But we mustn’t ease off in our efforts; we have to make sure we’re going in the right direction, which I’m sure we are. But our competitors aren’t sleeping either, they’re moving ahead too. For us, this means: push harder, put in even more effort and stay focused on doing the best job as a team. We’re heading to Valencia feeling positive.”

Where do you see the TAG Heuer Porsche Formula E Team after the first four races of this season?
“We shone in some areas, and we’ve been exposed in others. We definitely have a good basis for the new car. It’s now up to us to tap the full potential of the car, drivers and team. If we manage this, we’ll be right up there not just in qualifying, but also at the end of the race.”

Pascal Wehrlein, Porsche works driver (#99)
You scored your first podium after just four races with Porsche. Are you happy with how things are going for you?
“Absolutely. The first grid row in Diriyah, the first podium in Rome – I can easily live with such a positive trend. I had a slightly longer break than most of my competitors because I didn’t quite finish the previous season with my former team. Now to see that this break hasn’t had a negative effect on my quality of driving and that I can immediately produce good results with my new team makes me happy.”

What do you expect in Valencia?
“The course for the race will be different to the one we drove on at the pre-season test. At least there’ll be a new track layout, and I’m very keen to see it. In any case, I’m thrilled that we’re racing again after two weeks. Even though not everything is going to plan for us, we know what we have to work on to regularly achieve decent results and hopefully our first victory soon. I hope we can implement some of these improvements in Valencia.”

André Lotterer, Porsche works driver (#36)
The races in Rome didn’t go as you’d hoped and you went home empty-handed. How do you process such a weekend?
“With commitment and hard work. I headed into the simulator almost straight away. In terms of speed, we underlined in Rome that we can match the pace of the leaders, especially in qualifying. We’re really good at that. Obviously, a weekend with no points is tough, but as I’ve said: We have to keep our heads high and continue fighting.”

What are your expectations for Valencia?
“One goal is definitely to earn the first points of the season. The prospects look good, after all, we have the pace in practice and qualifying. There’s still room for improvement in the race and we’re working on that. I hope I’ll finally be able to join the frontrunners in Valencia.”

The racetrack
This marks the first time that the ABB FIA Formula E World Championship will hold a race on the Circuit Ricardo Tormo, named after the Spanish motorbike legend. “It’s not a typical Formula E circuit and it’s certainly not as much fun as the Rome one. Even though the track layout for the races will be different, we have the test data in the pits and we know roughly what to expect,” says André Lotterer. Amiel Lindesay addes: “For the Valencia E-Prix, there will be a chicane and a slightly different layout at the back of the track. It’ll be interesting.”

The Porsche 99X Electric
Campaigning the Porsche 99X Electric, Porsche returned to open-wheel single-seater racing in 2019 after more then 30 years and celebrated a successful debut scoring second place at the season-opener in Saudi Arabia’s Diriyah. The fully-electric racing car sporting the Weissach-developed Porsche E Performance Powertrain also serves as a development platform for the sports car manufacturer’s fully-electric production models. Energy management and efficiency are important factors of success in Formula E and in the development of production cars. The 99X Electric has a maximum output of 250 kW (340 hp) in qualification mode and 200 kW (270 hp) in normal race mode. Attack Mode boosts the output to 235 kW (320 hp), with Fanboost increasing the performance to 250 kW (340 hp). Maximum recuperation is 250 kW; the usable battery capacity is 52 Kilowatt hours.

Formula E
Formula E is the world’s first fully-electric street racing series and has been treating people living in major cities to thrilling motorsport since 2014. As an accelerator for innovative and sustainable technologies of mobility, it promotes the worldwide acceptance of electric vehicles with the aim to counteract climate change. The format is compact: practice, qualifying and race all take place on one day. Each race is contested over 45 minutes plus one lap. Formula E, which features a team and driver world championship for the first time this year, has attracted more automobile manufacturers than any other racing series. This makes for interesting and hotly contested races. In 2021, the TAG Heuer Porsche Formula E Team tackles its second season running the Porsche 99X Electric.