Tag Heuer and Indycar take their history into the future

Tag Heuer and Indycar take their history into the future 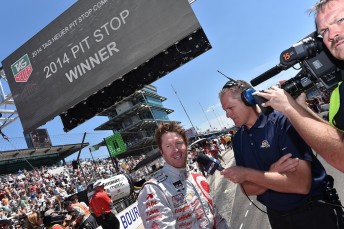 IndyCar announced today that TAG Heuer, the world-leading luxury Swiss watch brand recognized for its prestigious sports watches and chronographs, has been named the official watch of the Verizon IndyCar Series and Indianapolis Motor Speedway.

The partnership includes entitlement sponsorship of the TAG Heuer Pit Stop Challenge, held annually on Carb Day before the Indianapolis 500.

“TAG Heuer is an iconic brand and a perfect representation of the speed, precision, technology and innovation that are the pillars of our sport.”

For more than 150 years, TAG Heuer has stood at the forefront of the auto racing industry. Crafting and perfecting timepieces of ultimate precision, TAG Heuer’s involvement in motorsports extends from legends like Niki Lauda, Ayrton Senna, Steve McQueen and Jenson Button to mythical races including Le Mans, the Monaco Grand Prix and the Indianapolis 500.

To commemorate this partnership and to celebrate the brand’s newest title as the official timepiece of the Indianapolis Motor Speedway and the Verizon IndyCar Series, TAG Heuer has created a special edition, Indy 500 Chronograph.

“We are thrilled to continue our successful partnership and to become not only the official timepiece of the Verizon IndyCar Series and the Indianapolis Motor Speedway but the title sponsor for an event so focused on timing, the TAG Heuer Pit Stop Challenge.”

The Indy 500 Chronograph boasts a grey stylised dial patterned after the iconic “Yard of Bricks” start/finish line of the historic Indianapolis Motor Speedway and a printed “INDY 500” logo inside the counter at 6 o’clock. To honor this partnership even further, the winner of each race throughout the Verizon IndyCar Series will receive the exclusive timepiece from the brand.