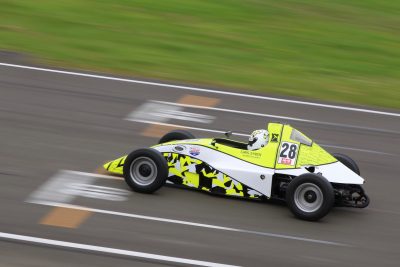 Symon, who’s in his 5th season of Formula First racing, carried this dominance through to the opening eight-lap race of the season, taking the race win by over three seconds. Foster narrowly beat Frazer to second place by less than one-tenth of a second. Hendl-Cox took fourth ahead of Taranaki rookie Thomas Boniface. Boniface’s debut performance impressed many after the 14-year-old started 11th and moved through to run as high as second before finishing fifth.

Sunday morning’s race two, 8 laps, was a similar affair for Symon, stretching away from the field on the first lap, leaving everyone else to scrap for second place, which went to Frazer after an intense battle Foster with Hendl-Cox again finishing fourth. Smith recorded fifth while Murphy was the best of the rookies in seventh. The Sunday morning race also featured the first incident of the new season after Boniface suffered brake failure and collected the rear of Taylor Hurst’s car on his way off the track at the hairpin. Both rejoined the track in lower positions but Boniface’s race would end at the next corner as he was unable to stop the car and become stranded in the gravel trap. Hurst would finish 14th.

The final 8-lap race on Sunday afternoon was not as easy for Symon, who came under fire early on from Boniface, Hendl-Cox and Frazer and dropped down to fourth out of the first Manfeild’s famed turn one, a sweeping right-hander. Boniface took the early lead but fell victim to an engine failure on the second lap. With the field still bunched up, a five-car train comprising Symon, Frazer, Hendl-Cox, Foster and Smith traded positions in a bid to take the lead, but ultimately Symon’s experience won out over the younger drivers as he took the chequered flag to complete a perfect weekend. Foster claimed another second place while Hendl-Cox took his first podium of the season ahead of Frazer and Hurst. Murphy again finished as the leading rookie in sixth.

Symons’ perfect weekend leaves him on top of the points with 225 points, 31 points ahead of Foster in second with a small gap of 13 points to Frazer in third. Hendl-Cox sits fourth with Amy Smith fifth, just one point ahead of leading rookie Ronan Murphy.

The Hi-Q Components NZ Formula First Championship contenders have a break now before round two at Pukekohe Park Raceway where they will also celebrate 50 years of Formula First racing in New Zealand. The MotorSport New Zealand championship is highly-regarded as a key first step into single-seater motorsport for younger drivers, this season attracting ten competitors under the age of 20. It’s also still a popular category of racing for older drivers who enjoy the close, wheel-to-wheel racing among the evenly-matched 1200cc VW engine-powered single-seaters.