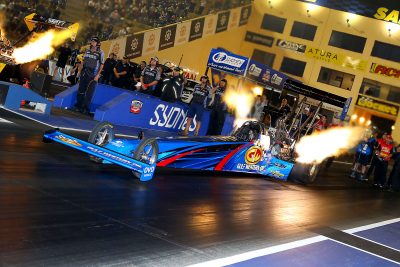 2019 will see the 15th Anniversary of Sydney Dragway’s opening and to commemorate the occasion Sydney Dragway will celebrate over the entire 2019 season via several initiatives and programs that competitors, fans and all members of the Motorsports community will be able to participate.

A special 15 Year Anniversary logo will be used from January 2019, commemorating the occasion. Designed with the history of the venue in mind, the logo incorporates several features from the previous logos used at the venue.

The logo incorporates elements of the current Sydney Dragway Logo, a stylised Christmas tree used in the 2011 logo and also the positioning of the Christmas tree from the original WSID logo to the left. The prominent ruby red colour is a distinctive change from the “Sydney Dragway blue” and is the traditional colour of a 15 year anniversary.

“We really wanted to acknowledge the significance and importance of this celebration”, Sydney Dragway General Manager Peter Beamount said today. “This is about recognising the success of the venue and those who contributed to it, but also with a view to keep driving forward into the future and to make sure that the next 15 years are even more successful”.

In the lead-up to the Summer Thunder in January 2019, Sydney Dragway will be counting down the “15 Greatest Moments” from the first 15 years of Sydney Dragway’s history. Fan voting will take place in conjunction with Drag News Magazine, beginning in September – allowing fans to become a part of the celebrations.

The 2019 Summer Thunder will also see the unveiling of the 15th Anniversary Garden, to be located to the left of the head of the staging lanes. Fans and competitors alike will be able to purchase a paver engraved with their name or their family name and become a permanent part of Sydney Dragway history.

The garden will also feature a Walk of Fame, with a wall feature documenting some of the history of the venue and incorporating the ANFA Pioneer and Legends Awards area, as well as a permanent commemoration of the “15 Greatest Moments” of Sydney Dragway as voted by the fans.

“This is just the start of the celebrations” beamed Mr. Beamont, “and we look forward to announcing more initiatives and activities over the coming months”.