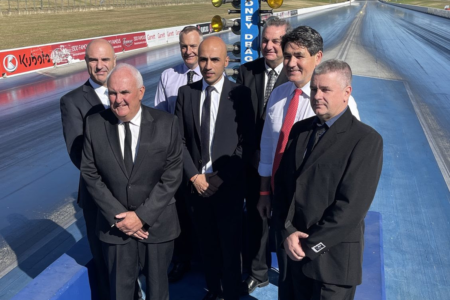 Racers at Sydney Dragway are set for their best performances with resurfacing works officially opened today.

“This upgrade replaces the previous 15 year-old surface and provides a world class surface for racers of all levels.”

Mr. Lee surveyed the new facilities at Sydney Dragway on Wednesday punctuated by taking ride in the ACDelco Pro Slammer driven by Mark Hinchelwood. This car is the only car of it’s type in Australia to be able to take passengers, and the Minister enjoyed a casual 300 kilometre per hour blast down the new racing surface.

Key features of the upgrade include a new, continuously reinforced concrete surface, as well as significant work on the grandstand, corporate facilities, lighting and power, amenities and general building maintenance.

Sydney Dragway General Manager Darryl Stephen said they are looking forward to their first major event since the refurbishments.

“We have already seen some world record performances on the new surface in testing, and we are looking forward to opening the doors for our fans to enjoy the new facilities at Sydney Dragway for the Gulf Western Oil Nitro Thunder on the 7th and 8th of May,” Mr Stephen said.

“On behalf of Sydney Dragway, I thank the NSW Government, Western Sydney Parklands Trust, the NSW Office of Sport and the drag racing community for their support throughout the project and venue upgrades.”

The new surface will be used for an exciting calendar of events in 2021 and delivered in line with COVID Safe requirements.