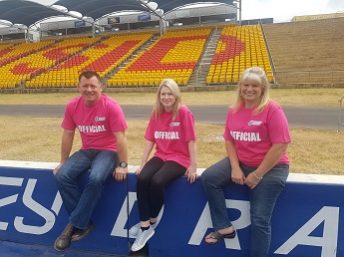 Sydney Dragway has a long history of being associated with charity and female racers, so when the opportunity arose to show a softer side and also support for the prevention of women’s cancers,  it seemed like a natural fit.

For the week starting Monday 17th October, Sydney Dragway will go pink in support of the cause including a freshly revised logo fitting with the pink theme across all social media accounts and website, Pink Official’s Uniforms for all events during the week and collection points for the public and drag racing community to make donations to the worthy cause.

The events that the activities will encompass are Race For Real on Wednesday 18th October, Full Throttle Friday on 20thOcober and Round 7 of the ATURA NSW Championship Series on Saturday 21st October. All Sydney Dragway Officials will be fitted out with a Pink Official’s Uniforms for the duration of the week.

Those wishing to donate can do so at the specially marked locations in the Scrutineering Shed, at the Reception Desk in the office, and at the Track Apparel Shop. There will also be roaming collectors making their way through the grandstand over the course of the events.

Sydney Dragway General Manager Peter Beaumont said today “It’s hard to imagine that there is anyone out there that hasn’t been affected by cancer or knows someone who has battled cancer. This is a really great way to show our support for those that may be going through a tough time at the moment and also to raise some money for the Cancer Council’s Pink Ribbon campaign through October”.