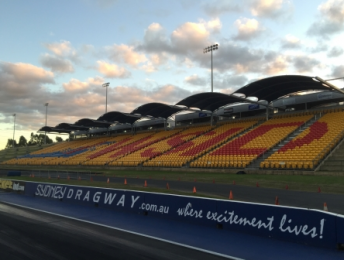 MEDIA RELEASE: Sydney Dragway recently announced that the International Hot Rod Association (IHRA) Australia is now the preferred sanctioning body for the world class venue located at Eastern Creek in the Sydney Metropolitan area.
Sydney Dragway Vice Chairman Rick Gauci today confirmed, “This is a momentous day for our racetrack. It gives us stability and continuity heading into the future and allows us to plan with confidence the schedule of racing events at our venue for the years ahead.”
“This is another example of the nexus of our decision to move heavily into Australia and into new markets,” stated Chris Lencheski, IRG Sports + Entertainment vice chairman & CEO. “We’re very happy with the progress and momentum coming from our IHRA team in Australia, along with Mike Dunn and Maurice Allen. Sydney is the largest market in Australia and by them confirming their relationship with the IHRA it secures our position as an international series.”
The announcement comes on the heels of the IHRA announcing the additional of Wide Bay Motor Complex to the IHRA Australia portfolio of member tracks.
The IHRA currently sanctions Australia’s professional drag racing series, 400 Thunder as well as four Australia drag racing venues – Sydney Dragway, Willowbank Raceway, Springmount Raceway and Wide Bay Motor Complex.
The world’s second-largest drag racing sanctioning body started the international movement into Australia in 2015 and continues to focus on taking drag racing to non-traditional and mainstream audiences around the globe.
“The commit to expand our international presence into Australia continues and we couldn’t be more excited about Sydney Dragway’s continued relationship with the IHRA,” stated Mike Dunn, IHRA president. “Sydney Dragway is an incredible multi-use facility in the heart of Australia and to be able to secure our future there is key to our expansion.”
Sydney Dragway has already run sanctioned events under IHRA Australia, including the regular Race for Real off street event, Grudge Kings, The 400 Thunder Series and regular Test and Tunes to name a few.
The remaining rounds of the 2016 ATURA Championship Series will be run under the IHRA Australia sanction. To accommodate racers who hold ANDRA licenses, a day license will be available for these two events (October 22 and November 19, 2016).
For licensing inquiries, please contact the Sydney Dragway Office on (02) 9421 0700.