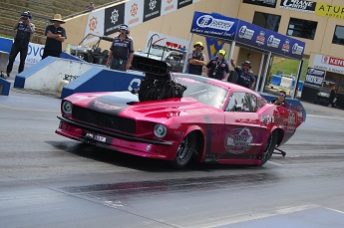 One of the biggest ever fields of Pro Slammers ever seen at Sydney Dragway is set to hit the track this Friday and Saturday as part of the ACDelco East Coast Thunder.

Reigning champion in the category, ACDelco backed driver Mark Belleri, will certainly have his hands full at his sponsors event – one at which he hopes to regain the form that saw him take the title last season.

Fifteen of the finest cars in the country stand in his way, in a field that includes heavy hitters John Zappia, Ben Bray, Scott MacLean and Sam Fenech racing amongst a host of new faces appearing for the first time in a Pro Slammer at Sydney Dragway.

Michelle Davies is set to make her professional debut in her family’s Mustang, after running as quick as a 6.0 second pass in an exhibition category at the Gulf Western Oil Nitro Thunder last season. “Mustang Shelly” will be alongside fellow Pro Slammer rookie Steve Ham who is transitioning into Pro Slammer this weekend after a successful stint in Pro Alcohol.

Paul Mouhayet’s rise to the top has been nothing short of astonishing, and the driver in his rookie season of Pro Slammer competition currently sits second in the Pro Slammer points after a phenomenal debut in Darwin at the first round of the series. Throw in the quickest-ever-in-Australian-history 5.58 he recorded in testing just a few weeks ago, and he is one of the favourites to take home the Gold Christmas Tree.

Frankie Taylor is a name not many casual fans would know – yet! Known as the “Mad Man”, he will be in the seat of Team Bray’s Gulf Western Oil 1979 Corvette for the first time – though the Texan is one of the toughest drivers around and in his home country of the USA, has recorded some of the quickest times on record in his class.

With racers from all across the country, Pro Slammer is undoubtedly going to be one of the highlights is the ACDelco East Coast Thunder – and with a 16 car field, whoever wins it will have to earn it the hard way.

Pro Slammer will feature at the ACDELCO East Coast Thunder on November 3-4.

Tickets are available now at www.sydneydragway.com.au