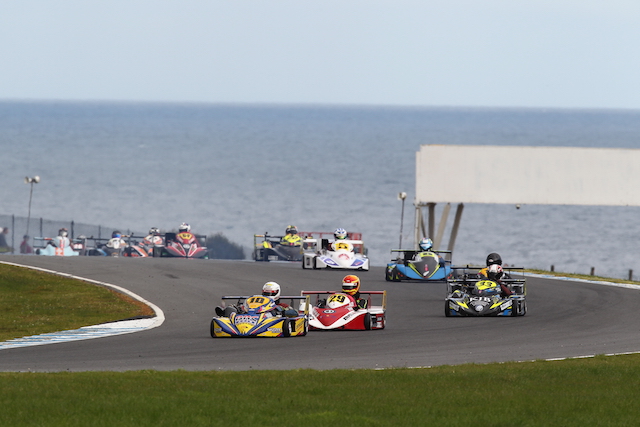 MEDIA RELEASE: After lengthy discussions with competitors in every state it became abundantly clear that the drivers wanted a National Title for all classes at the one event, at an affordable price.

The Superkart Clubs held discussions last year and decided to expand on the already successful “NGB Nationals” that they had run for many years and that in 2016 it would include all classes.

The Nationals will be held in August at the Phillip Island Grand Prix circuit which is arguably Australia’s best Motorsport facility over a single weekend, which will be the first time in 10 years that the 250s will race by themselves without other classes on track.

The same goes for the 125 and Non Gearbox classes.

“The sport via communication with their clubs wanted to go back to an event that showcases all the classes we offer and has them all racing together at the same event,” said one of the event organisers.

“This way we get to watch the other class’s race, something that couldn’t be done in the past with the split series and combined races.”

The sport could see that with the increasing costs and dwindling numbers at other premium events it was time to take a step back and regroup so as to bring the sport back as one.

The Nationals will be run over the weekend of August 20 & 21.

The entry fee will be kept under $450.00 and includes a pit lane garage space plus entry to the now famous “Drivers Lounge” for catering all weekend for the drivers.

All classes will be racing for the coveted number one and this will be the biggest single gathering of Superkarts in years. The event will be run under a Cams permit.

This National event should not be confused with the 3 round series being run by SKA, a private company running its own events.

This single weekend Nationals is put together by the Superkart Clubs for their members.

A naming rights sponsor is due to be announced very soon and more details will be published as they come to hand.

The organisers of this event are looking forward to seeing everybody at Phillip Island in August for great time and some serious racing as well.