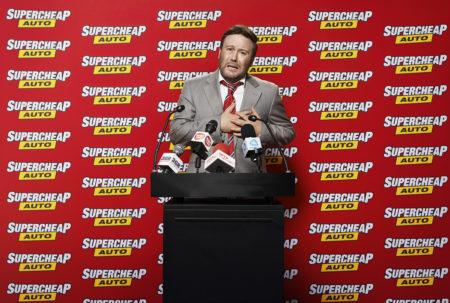 An outpouring of public support for Murray followed the airing of the unsolicited press conference, with the Australian public and motorsport fans getting behind the young professional as his ‘confessions of a heartbroken fan’ campaign gained momentum.

The debacle comes just days out from the ‘great race’ at Mount Panorama, with fans gearing up to celebrate #happybathurstday around the country.

An official statement from Supercheap Auto is slated for release in the coming day.

If you love them, let them go. If you really love them, hold a bunch of press conferences confessing your love and vow to never let them go. The latter is the way Supercheap Auto has chosen to go after it was announced earlier this year, that despite 16 years of blissful partnership, next year the Bathurst 1000 have decided to end things and see other sponsors.

An international owned sponsor nevertheless. To Supercheap Auto, it was more than a sponsorship, it was a love affair. There was and still is no bigger fan of the Bathurst 1000 than Supercheap Auto. Which is why they were heartbroken when the decision came down to who was willing to pay the most money.

But Supercheap Auto is not going down without a fight and the humble press conference seemed the most 2020 way to do that. Will this end like Romeo and Juliet or will it be more of Ross and Rachel situation? Only time will tell.

Nathan Murray loves two things; Bathurst and bargains. There is no wonder he ended up working for Supercheap Auto in charge of looking after the relationship between Supercheap Auto and the Bathurst 1000. His official job title is Chief Jr Executive Public Relations Sponsorship Division. If it sounds made up, that’s because he made it up. So far in his career, Nathan has had it pretty easy, working his dream job which mostly involved hanging out at Bathurst and living anything supercars…All the while enjoying the team discount at Supercheap Auto.

However, that all changed this year after ‘the worst tragedy ever’. His words. This year Bathurst 1000 announced that after 16 years of partnership, in 2021, Repco will take over as naming sponsor. Not only has Nathan taken this hard, he has been pushed into the spotlight to deal with the public and press on the matter. This is the first time Nathan has done a press conference. In fact, it might be the first time he has worn a tie. Nathan may not be the sharpest tool in the shed but he knows every tool at Supercheap Auto and their prices. Nathan is passionate about Bathurst. To him, this is a break-up and he acts accordingly. Deep down he thinks that maybe he can help win them back and if it means having to stand in front of the camera live to millions of people, he’ll do it. And as an audience, we can’t help but root for him.