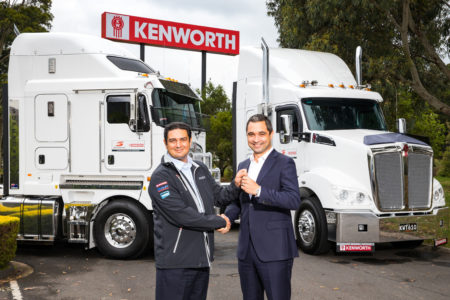 Supercars this week announced a three-year extension with Kenworth Trucks to build on its 20-year partnership with the Virgin Australia Supercars Championship.

The extension takes the Kenworth-Supercars partnership to 24 years at the end of 2023.

As part of the longstanding partnership, Kenworth provides transportation support to every Australian Supercars event – spanning over 35,000 kilometres each season.

Director Sales and Marketing PACCAR Australia, Brad May, said the Kenworth-Supercars partnership that began in 2000 has offered unique benefits for the business.

“I am pleased to confirm that Kenworth has extended its partnership with Supercars for a further three years,” May said.

“Our Supercars partnership has delivered a fantastic medium to offer our customers a unique experience inside the four walls of the Supercar community.

There are many synergies between the interests of transport operators and enthusiasts of motor racing, as often it is the fuel running through the veins of both that ignites their passion.

“Giving our customers the opportunity to get up close and personal with the Supercars, and the teams involved, is one that we have come to understand is invaluable in building long-term and strong relationships with transport owners and operators sharing a common interest in the sport.”

Kenworth will continue to provide Supercars with two Kenworth-built trucks – one which transports both the Safety and Medical cars and facilitates the Supercars Motorsport team as their office at events, and the second which serves as the CEO Boardroom and Supercars media hub.

“Having Kenworth partner with us for more than two decades highlights the strong bonds that have been built and we’re excited to see where that takes us in the future,” Seamer said.

Another important Kenworth offering is support to drivers parades – the first of which was in Eastern Creek in 2003 before it officially claimed naming rights to the Kenworth Drivers Parade at the Bathurst event in 2006 which continues to be a fan favourite.

“We look forward to another successful three years of working with the Supercars team and hearing those air horns around the mountain each October as a fleet of Kenworths lead the drivers around before the great race begins,” May said.