MEDIA RELEASE: Queensland-based national plumbing supplies company, Samios has jumped behind Broc Feeney on his step-up to the Dunlop Super2 Supercars Series with Tickford Racing starting this weekend at the Superloop Adelaide 500. 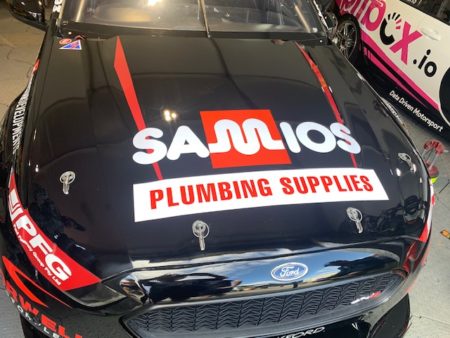 The plumbing supplies outfit with stores nationally enters Supercars for the first time with the 17-year-old boom rookie, who graduates to the factory Ford team after winning last year’s Super3 Series.

Feeney will start this afternoon’s first race – set for 4:40pm South Australian time – from seventh on the grid after being as high as fourth during the lunchtime qualifying session.

The support from Samios, only coming together earlier this week, sees its logo debuting on the bonnet of the striking black and red Ford this weekend on the streets of Adelaide.

Feeney – who is a Year 12 Student as well as a TAFE Queensland apprentice – hit the track for the first time Thursday in two practice sessions before returning today. He’ll race three times across the weekend in the Virgin Australia Supercars Series Dunlop-backed training academy.

While Feeney’s apprenticeship is in the automotive mechanical arena, the relationship provides a great synergy for Samios Plumbing Supplies given the number of apprentices at a similar age to the 17-year-old in the plumbing trade across Australia – no doubt developing an in-built following for the #5 throughout the 2020 Dunlop Super2 Supercars Series.

Live coverage of the Dunlop Super2 Series from the Superloop Adelaide 500 will be carried through Fox Sports 506, KAYO Sports and Network 10 throughout the weekend.

“It’s a pretty wild track and I’ve been very comfortable in the car so far,” said Feeney. “We’ve got the first sector down and we do have a bit to pick up in the other sectors, but best of all I feel comfortable with where we are at. I think starting race one from seventh is a good spot to be and I’m happy with that for my first time here at this historic Adelaide Parklands Circuit.

“It has been a huge effort to get everything ready after making our announcement at the end of last year that we were joining Tickford for this year’s Dunlop Super2 Series.

“We’re so happy to welcome Samios Plumbing Supplies to Supercars and join us from the first round, we’re aiming to give them plenty of exposure throughout the weekend.

“For me as a young guy, an apprentice when I’m not racing, there are plenty of Samios customers that would have apprentices around my age working for them.

“Our program will appeal at many levels, so hopefully all those guys are right behind us throughout the year as we work our way up the Super2 grid.

“Tickford Racing have been incredible in bringing me up to speed. The racing format is progressive, so where you finish one race is where you start the next, so from my point of view I just have to keep my nose clean and advance the #5 up the field.

“Everyone that has shown interest in my move up to Super2 this year has been awesome. We’ve been working hard over the off-season to get the program together and also get my fitness up ready for this. We’re ready for it.”

To find out more about Samios Plumbing Supplies, visit www.samios.net.au