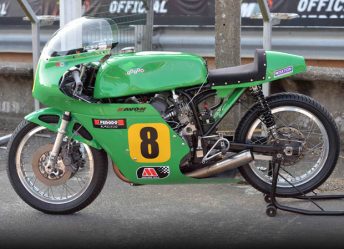 Team Winfield, one of the most successful Classic motorcycle racing teams on the planet, will once again take to the TT Mountain Course in 2017 having secured the considerable talents of Josh Brookes for the Classic TT Races presented by Bennetts.

The team will concentrate their efforts this year on the Bennetts Senior Classic TT Race with Australian ace Brookes campaigning the 500cc Paton that John McGuinness took to a record-breaking victory 12 months ago.

Roger Winfield’s outfit have been ever-present at the Classic TT since 2013, and the Classic Manx Grand Prix before that, and although McGuinness was out of luck in the early years of the Classic TT, he made up for that last year when he won the race and set a new lap record of 113.342mph as he came home over twenty seconds clear of Dean Harrison.

The 23-time Isle of Man TT had been due to ride Winfield’s rapid 500cc twin cylinder Paton again this year but having sustained leg injuries at the North West 200, the team were in need of a top quality replacement and they’ve got just that in 34-year old Brookes.

The former British Superbike Champion enjoyed a superb return to the 37.73-mile Mountain Course at this year’s TT as he lapped at close to 131mph on the SG6 Norton on his way to securing sixth place in the Pokerstars Senior Race. He took the same result in the Bennetts Lightweight Race, on Ryan Farquhar’s IEG/KMR Kawasaki. The Northern Irishman himself has a strong link to Team Winfield having taken numerous victories at the Manx Grand Prix on Winfield’s immaculately prepared machines.

Brookes will be getting his first taste of Classic TT action but there’s not doubt that the combination of his skill and talent and Winfield’s engineering expertise, is one to be feared They will come into this year’s event as one of the pre-race favourites. Indeed, the Sydney rider could well start favourite for his maiden Mountain Course race victory.

“We were deeply saddened when John (McGuinness) was ruled out after his crash at the North West 200. Working with John has been a real highlight for our team over the past few years and after some terrible luck we showed what we are capable of last year when he won the race and moved the lap record on considerably. Hopefully he will continue to mend well and we look forward to be able to work with him again in the future.”

“The task of replacing the most successful living TT rider has been a difficult one and we would have been forced to miss the event if we couldn’t find a rider of the very highest calibre to fill John’s boots so we were delighted when Josh Brookes agreed to join our team. While not as experienced on the Mountain Course as some of the riders in the field, there is no question about his skill level, and his results impressed everyone at this year’s TT after two years away. We will give Josh a great bike which hopefully he will get a lot of enjoyment out of riding, and we will see where we all end up after a week’s qualifying and four fast laps in the race itself.”

“It’s great to be riding the team Winfield Paton at the Classic TT. The team and the bike clearly have pedigree having won last year’s race and setting a new lap record. It’s going to be a steep learning curve for me with a type of bike I have no experience of riding, but I am looking forward to the challenge and will give it my all to give Roger and the team a good result.”

Classic TT Grandstand tickets are available now starting from as little at £5 with race day tickets priced at £20. VIP experiences, tickets for the Classic TT Party on Saturday 26thAugust the RST Classic TT Legends Dinner on Sunday 27th and the Classic TT Prize giving and Closing Party on Monday 28th August are all available to buy now at iomtt.com or our sales hotline on (00 44) (0) 1624 640011.