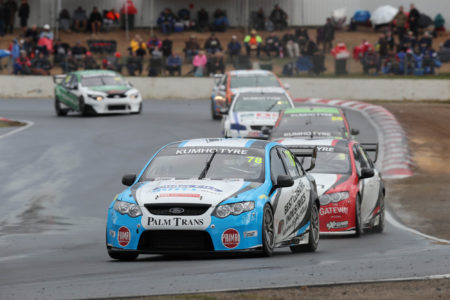 Drivers in the Super3 Series will have extra incentive to be the fastest qualifier among their class of V8 Touring Cars, with the Gulf Western Oil Pole Award to be presented at every round during the 2020 season.

The Gulf Western Oil Pole Award will offer $500 for the fastest driver in each qualifying session of the Super3 Series, which commences this weekend at Sydney Motorsport Park with two 18-lap (70.4km) races and a corresponding 15-minute qualifying session for each race.

In addition to the pole prize, two (2) series points will also be awarded to the pole sitters from both sessions.

Established in 2008 as the V8 Touring Car Series, Super3 moves into a new era in 2020 with a grid-sharing arrangement alongside the Dunlop Super2 Series.

Super3 drivers will compete in the same race as Super2 at four events supporting the Virgin Australia Supercars Championship, including the Supercheap Auto Bathurst 1000.

Super3 is regarded as an entry level of Supercars racing for young drivers and semi-professional competitors. All cars are pre-2013 Ford or Holden V8 Supercars and six Super3 alumni currently compete in the top tier of Supercars.

Gulf Western Oil’s partnership with Super3 extends its history and commitment of supporting Australian motorsport, which includes naming rights of the Gulf Western Touring Car Masters, sponsorship of national drag racing events and competitors in various disciplines of the sport.

The partnership with Super3 will see the Gulf Western Oil logo displayed on the rear wing endplates of every Super3 car.

The 2019 Super3 Series was won by Broc Feeney, who has this year stepped up to the Super2 category with Tickford Racing. Feeney will make his main game debut in this year’s Bathurst 1000 driving for Boost Mobile Racing alongside 2010 Supercars champion, James Courtney.

Every race of the Super3 Series can be seen live on FOX Sports.

“Gulf Western Oil is proud to support the Super3 Series with the Gulf Western Oil Pole Award in 2020. We have a long history in Australian motorsport with a number of V8 Fords and Holdens having raced in our colours over the years. It is fitting that Super3 will be sharing the track with Super2 this year as Gulf Western Oil was the main sponsor of 2009 Super2 Series Champion Jonathan Webb, as well as 2002 runner-up Dale Brede.

“We’re looking forward to seeing the young guns of Super3 pushing for the Gulf Western Oil Pole Award this season.”

“We are pleased to welcome Gulf Western Oil as a supporter of Super3, with a Pole Award that will be well received by our competitors and raise the stakes in our qualifying sessions.

“The drivers in Super3 are often in the early stages of their motorsport careers, so it is great to have a partner like Gulf Western Oil that recognises the importance of incentivising and supporting drivers at this level of the sport.”