The spectacular Super Trucks are set to pull big crowds to Round 2 of the Victorian Motor Racing Championships at Winton Motor Raceway next weekend, 4-5 July. pics: Judi McDonald

The spectacular Super Trucks are set to pull big crowds to Round 2 of the Victorian Motor Racing Championships at Winton Motor Raceway next weekend, 4-5 July.

The big rigs are holding the first round of their 2015 Australian Championship at Winton this year, and another enthralling show is expected after a thrilling 2014 for the category.

Last year’s contest culminated in a tense decider in the very last race of the season, eventually falling the way of veteran Frank Amoroso, who broke a 26-year drought to be crowned the national Champion. 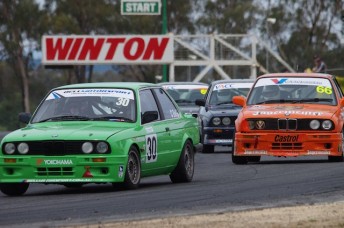 The BMW Drivers Cup will feature a new twin-driver format, including a one-hour race on the Sunday

While Amoroso’s participation for the full 2015 series is in doubt, a host of other contenders have stepped up to the plate, including two-time Australian and New Zealand Champion Steven Zammit.

“I’m feeling really pumped about the weekend, we’ve done a lot of work on our Kenworth to get it ready for this season,” Zammit said.

“It’s a shame Frank doesn’t look like doing the whole year, but there are quite a few other trucks that will really give us a run for our money this season. Formula Vee will hold the second round of their national series, with a number of competitors travelling from interstate

“Shane Gray’s truck was very fast last year, and this year it’s going to be driven by John Hepburn, who won the New Zealand Super Truck Championship, so he’ll be a big threat.

“John Bomberle came back last year after a few years off and was on the pace straight away, and Barry Butwell was starting to go well towards the end of the season so he should be there or thereabouts.

“It’s been a big off-season for everyone, people will have made a lot of improvements, so we won’t really know how fast everyone is until we all hit the track.

“The Winton crowd has been very supportive over the years, so we’ll be doing our best to put on a good show for them.”

While the trucks are the headline act for the weekend, a number of other categories are on the program including Formula Vee, which holds the second round of its 2015 national series.

NSW driver Michael Kinsella currently leads the series after a strong weekend in the opening round at Mallala, and is full of confidence after a clean sweep of the NSW Formula Vee round at Wakefield Park last weekend.

The BMW Drivers Cup for E30 3 Series and Invited Cars makes its second appearance at Winton for 2015, with an exciting new format thrown into the mix.

Each car will be shared by two drivers, with the series regulars to be joined by part-time co-drivers. Each driver will compete in a sprint race on Saturday, while Sunday will feature a one-hour endurance race with a compulsory pit-stop and driver change to be taken by all vehicles.

Fresh from setting the lap record at Wakefield Park during the previous BMW Drivers Cup round, Stan Armstrong looks set to be a strong contender; he will be joined by former series Champion Alan Saint for the event.

Other entrants include Sean Bell/Anton Bergman, the father-and-daughter team of Graeme/Jess Bell, and Brian Bourke/Andrew Larkin.

Following a strong performance in the Sports Sedan support races at the V8 Supercars, Chris Muscat should be a front-runner in his Mazda RX7 while current points leader Ian Cowley will be strong in his ex-Perkins Motorsport Holden VS Commodore V8 Supercar.

Bruce Henley (Mazda RX8 GT) is also well-placed in the points, along with Lee Ulhorn in his RX7.

The Miniature Race Car Series will see the first appearance at Winton for the Legend Cars, which have been adapted from speedway racing.

They will be joined on the grid by motorcycle-powered Future Racers and Aussie Racing Cars, with former Commodore Cup racer Daniel Orr entered in the Future Racer he recently purchased from Matthew Thompson.