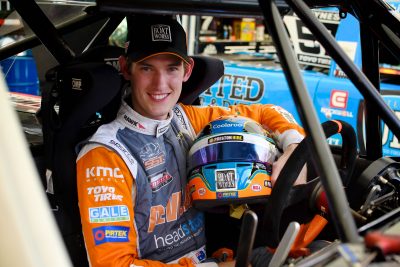 Third generation racer, Matt Brabham’s Stadium SUPER Truck championship hunt fires up as the series rolls into its penultimate round at Sydney Motorsport Park this weekend.

Brabham has held the series points lead since the second round on the streets of Adelaide as he charges towards his maiden Stadium SUPER Truck series’ title win after bitterly finishing runner up last year.

Last year, Brabham had one hand on the title trophy before fellow countryman Paul Morris snatched it away by a single point.

With just two rounds to go in the series, Brabham is comfortable with a 50 point advantage over Gavin Harlien. They are the only two drivers that are mathematically in the championship hunt.

This round marks the return of Stadium SUPER Trucks to Australia for the first time since May, while controversy continues between series organisers and sanctioning bodies.

Brabham wasn’t able to race on the streets of his hometown Gold Coast last weekend after the series was forced to cancel the round, but he is excited to be able to defend his points lead on Australian soil.

Ironically, he will be doing that on a circuit where the main straight is actually named after his grandfather, Sir Jack Brabham, who won the world F1 championship three times.

Stadium SUPER Trucks have joined the bill of the Australian Motor Racing Series for the weekend in Sydney.

Brabham will be carrying the supporting colours of The Boat Works and Coolaroo on his DeVilbiss entry this weekend.

Earlier this year he team with Tony Longhurst and Aaron Seton to win their class in The Boats BMW GT4 at the Bathurst 12-hour.

Matt’s 2018 campaigns are supported by The Boat Works, DeVilbiss, the Preston Group, Gale Pacific, Coolaroo, PIRTEK and the Chris Kyle Frog Foundation, of which he is a proud ambassador.

WHAT MATT HAD TO SAY…

“It’s exciting to be back in Australia with just two rounds to go and be leading the championship. I might not be able to take it out this weekend points-wise, but putting together a strong weekend will definitely take the pressure off going into California,” said Brabham.

“The racing here should be really good, with the ups-and-downs around the track it should really suit us. It could be like Road America with a lot of slipstreaming and side-by-side racing. It should be really exciting racing.”

“It’s cool to be here, to get to the track you come through Brabham drive and the front straight is a tribute to Jack, the track and the ARDC do a really good job with everything.”