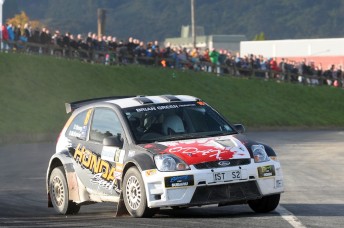 Auckland’s Dave Strong in action on the tarmac street stage at this years Otago Rally. A similar spectator stage will be a feature of the new VINZ Gold Rush Rally of Coromandel. Pic: Euan Cameron

An afternoon spectator Super Special Stage will bring the spectacular action of rallying into the township of Whitianga for the VINZ Gold Rush Rally of Coromandel on Saturday 23rd August.

The Super Special Stage will be run on a 1.17 kilometre tarmac course alongside the Whitianga Waterways on Joan Gaskell Drive.

Competitors will contest the special stage twice on Saturday afternoon as part of the Gold Rush Rally, which is round five of the Brian Green Property Group New Zealand Rally Championship driven by VINZ.

“Spectators will be able to get a great view of the action,” commented Clerk of Course Steve Foster.

“The cars will run one at a time down, heading down one side of Joan Gaskell Drive before changing lanes and over a bridge that crosses the waterways. A tight hairpin bend, back over the bridge and another change of lanes before a sprint to the flying finish complete the short but technical stage. The course will really showcase how rally cars accelerate and corner,” stated Foster.
The Super Special stage will be contested twice providing an afternoon of constant action to entertain the crowds.

The first run of the anticipated 60 car plus field starts at 2pm on Saturday, followed by the second run at 3.15pm which is also the final stage of the event.

The rally finish will also take place on Joan Gaskell drive with cars entering a parc-ferme area following completion of the second running of the stage, before crossing the finish ramp and customary victory celebrations with podium presentation from 3.55pm.

The VINZ Gold Rush Rally of Coromandel is a new event on the national rallying calendar with the support of the Thames Coromandel District Council a major component in bringing the event to the area.

“The rally is going to be a real highlight of the Coromandel’s event calendar in 2014 and being able to have two stages of the competition right in Whitianga is not only a great opportunity to showcase our town but also provide our community fantastic access to another major event,” said Thames Coromandel District Mayor Glenn Leach.

The Whitianga Special Stage will be one of many opportunities the public and rally fans will have to see the VINZ Gold Rush Rally of Coromandel.

The Service Park at the Mercury Bay Multi Sports Park, will be the base for the teams contesting the fifth round of the Brian Green Property Group NZ Rally Championship driven by VINZ, along with competitors in supporting series including Rally Xtreme and the Top Half Rally series.

Entries for the August have already started flowing in from around the country with a top quality field of teams anticipated to contest the new event.

The VINZ Gold Rush Rally of Coromandel takes place on Saturday 23rd August and is the fifth round of the Brian Green Property Group New Zealand Rally Championship driven by VINZ. Based at the seaside town of Whitianga the event will be contested over nine special stages totalling 135 kilometres in competitive distance on the roads of the Coromandel Peninsula.