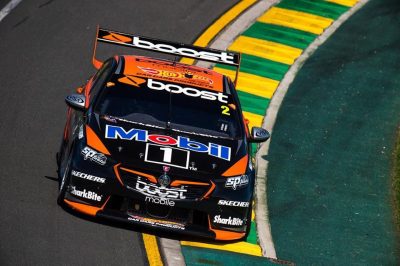 Rolling a six was the order of the day for the Hot Wheels™ Car Care Products drivers on a very hot Fast Friday at the Formula 1 Rolex Australian Grand Prix in Melbourne.

Walkinshaw Andretti United’s Scott Pye has been having an outstanding weekend so far and took the #2 Hot Wheels™ Car Care Products-backed car to sixth placing in the Virgin Australia Supercars Championship first race.

His team-mate – Hot Wheels™ Car Care Products ambassador, James Courtney – made a ton of ground having started in 20th position, he came through for 12th at the chequered flag.

In the Australian GT Championship race – which was re-scheduled to be held at 7pm after an on-track incident earlier in the day – Liam Talbot put together a terrific run to finish in sixth placing.

This backed up the fifth place from John Martin yesterday, leaving both in good stead Championship-points wise.

After coming to grips with a brand new aero package that has been applied to the Hot Wheels™ Car Care Products Porsche 911 GT3-R for season 2018, Talbot and team-mate John Martin feel as though the changes applied to the car overnight by the Walkinshaw GT3 team is seeing them head in the right direction as the weekend progresses.

Pye will start tomorrow’s second race (Race 4 of the season) from 14th on the grid, however also ended the final two qualifying sessions of the weekend today in an outstanding third and fifth place respectively.

Courtney on the other hand will continue to have his hands full, starting race two tomorrow from 23rd, backing that up with an excellent 11th qualifying for race three and a 25th position for the final race on Sunday.

Tomorrow, the Supercars boys will have two races at 12:40pm and 6:30pm local time.

John Martin jumps back behind the wheel of the Porsche at 12pm local, before Talbot finishes the weekend on Sunday – also at 12pm.

Television coverage of the Supercars and Australian GT will be live on Network Ten tomorrow, with Supercars coverage live on Fox Sports 506.

The Hot Wheels™ Car Care Products team have been creating a great deal of interest right around the paddock with fans of the brand for many years hotly anticipating the epic launch of the Australian made product.

To follow Hot Wheels™ Car Care Products and be the first to know when the product will be available to purchase, visit www.hotwheelscarcare.com.au or follow on Facebook www.facebook.com/hotwheelscarcare.