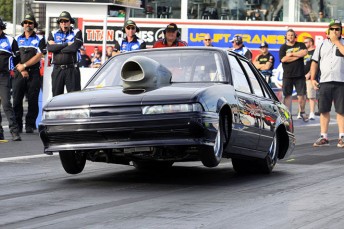 South Aussie Mario Barbon is hoping it will be third time lucky when the Fuchs Spring Nationals take centre stage at Adelaide International Raceway next weekend.

Barbon finished runner up at Australia’s biggest Drag Racing event, the Fuchs Winternationals in June, and Round 9 of the Aeroflow Sportsman Drag Racing Championship in Mildura earlier this month.

Given the Spring Nationals is South Australia’s second biggest motorsport carnival behind the Clipsal 500, Super Mario is aiming to go one step better to boost his Australian Super Stock Championship hopes ahead of the season ending Australian Nationals in Sydney.

“There are several other Super Stock racers who have a chance at winning this years championship,” he says.

“My crew and I will be trying as hard as we have been all season, but having been runner up at the Winternationals and in Mildura, plus also having two events cancelled earlier in the year where I had made it to the semi finals, it would be nice to get another win!”

“We will be testing prior to the Spring Nationals and have a couple of changes planned but there will be no backing off, it will be all out for the win.”

Barbon finds himself in second place on the Australian Super Stock Championship ladder and could find himself in first come the end of the Labour Day weekend in Adelaide.

“I am quietly confident, but as I said earlier there are some excellent Super Stock racers, Les Heintz, fellow South Australian Steve Norman, Clint George and Jake Chaisty, who have the potential to win this years Championship. But as we know, anything can happen so we’ll be there trying our best.

“For me the Spring Nationals for many years was AIR’s premier event, an event where many records were set and a track that many racers look forward to competing at.

“Thanks to Rino D’Alfonso and Racing Onn Promotions, the Springs are back and I’m looking forward to a great weekend.”