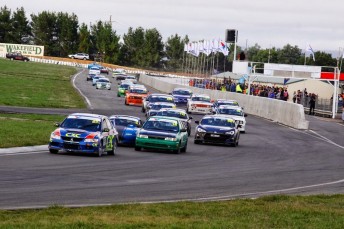 Leading Australian racing suspension manufacturer, Supashock, has today announced its sponsorship of the pole position award for this weekend’s opening round of the 2015 Australian Endurance Championship, the Valvoline Wakefield 300.

“Over the last few years, we’ve been fortunate enough to supply our racing dampers to teams in professional motorsport competition, including the Australian V8 Supercars Championship and European GT Championship,” Fiorinotto said.

“I have been keeping an eye on the Wakefield 300 for several years and I have been very impressed with the number of entries it attracts; it really has become the pinnacle of club-level motorsport in Australia.

“Drivers who compete in events like the Wakefield 300 are always very passionate about their cars, and like to have the best equipment at their disposal, so they are exactly the types of people who can benefit from Supashock products.”

“The Shootout is always held on the Saturday afternoon, and it’s one part of the weekend where everyone pays attention,” Ronke said.

“With the added bonus of a cash prize, it will be even more hotly contested than usual.

“We are pleased to welcome Supashock as the pole position award sponsor – it is pleasing to see a company that has been involved in professional competition supporting club-level motorsport as well.”

The Supashock Top 10 Shootout for the Valvoline Wakefield 300 will be held on Saturday afternoon, February 28, ahead of the race on Sunday, March 1.