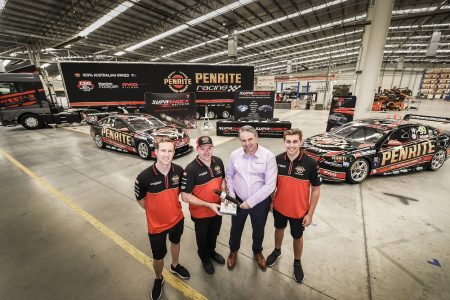 Supashock is pleased to announce the appointment of Erebus Motorsport as the company’s motorsport distributor under a new agreement signed on the eve of the 2019 Supercar season.

Erebus Motorsport will continue to provide technical feedback for Supashock’s team of engineers as part of the company’s product development process for motorsport dampers.

The new agreement will see the successful racing team become a key distributor for Supashock’s motorsport products including shock absorbers for vehicles in a range of state, national and international categories.

The Supashock – Erebus relationship has already yielded on-track success with driver David Reynolds achieving numerous pole positions and race wins on Supashock dampers, including his highlight victory alongside Luke Youlden in the 2017 Bathurst 1000.

“Supashock has been built off the back of a long history of success in high-performance racing and there is no better example of an emerging force in Supercars than the successful Erebus Motorsport team,” said Supashock Managing Director Oscar Fiorinotto.

“We are proud of our achievements together, and this partnership heralds a new future for our two organisations where Erebus Motorsport will lead Supashock’s motorsport sales activities.”

“Erebus has all the ingredients to provide us with critical feedback on our dampers, including an intelligent team of engineers and two immensely talented drivers.”

Erebus Motorsport Chief Executive Officer Barry Ryan said the company was proud to work alongside Supashock to deliver the best product for the team’s cars and Supashock customers.

“I’ve known Oscar for around twenty years through motorsport; his passion for racing and shock absorbers in particular has always been inspiring,” he said.

“It’s quite obvious his passion has made the Supashock business what it is today, and what I am sure it will keep growing to be in the future.

“We cannot think of a better technical partner to align with.”

The company employs around 50 highly-skilled staff, delivering products for customers all over the world, across sectors including motorsport, defence, mining, autonomous vehicles, automotive aftermarket and off-road/recreational automobiles. As well as being a proudly Australian-owned company, all Supashock products are manufactured in South Australia.

Mr Fiorinotto said motorsport would always be a key focus for the company.

“Supashock has diversified into other industries but motorsport is still very much a part of our DNA,” Mr Fiorinotto said.

“Aspects of motion control learned through our motorsport experience have proven valuable in producing products for other industries with harsh environments such as defence.

“Equally, lessons we’ve learned in these fields have filtered into our motorsport department, enabling us to refine and improve our motor-racing technology, which has been used.”

Mr Fiorinotto said the expanded relationship with Erebus will allow Supashock to enhance its reputation as a supplier of high-performing, superior-quality motorsport products.

“In terms of company values, Erebus and Supashock complement each other perfectly – we are both organisations that pride ourselves on pushing the boundaries, and challenging the established status quo,” he said.

Supashock is currently the control damper supplier for the ECB SuperUtes, and has supplied products to prestigious international series such as Formula 1, Formula E and European GT3. Fiorinotto said the company would be open to similar arrangements with other categories.

“Being accredited to international quality standards, we pride ourselves on our quality management program which is mandatory for Defence and Automotive OEM supply. Our Quality management plan incorporating our supplier improvement program has been implemented throughout all operational functions and supplier programs within the company and provides us with the best opportunity to deliver on time and to the highest standards,” Mr Fiorinotto said.

“Erebus has the respect of the wider motorsport industry, which will be valuable if we’re pursuing opportunities to supply control components to motor-racing series in the future.”

The Erebus-Supashock arrangement will be celebrated at this weekend’s Adelaide 500, with the Holden ZB Commodores of David Reynolds and Anton De Pasquale featuring prominent Supashock windscreen signage.