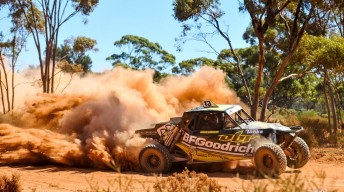 The Australian Off Road Championship has announced that it will join forces with its official host broadcaster, the Seven Network, in bringing Australia’s leading weekend breakfast television program to the 2014 Tatts Finke Desert Race.

After co-ordinating a successful live broadcast of Seven’s Sunrise breakfast program at last year’s event, it has been confirmed that the network’s highly-rated Weekend Sunrise program will be onsite for 2014, broadcasting both of its daily programs from the start/finish line.

With 90 off road car entries confirmed to start the iconic event next week, the program’s weather presenter James Tobin will make the journey to Alice Springs to not only present his live weather segments, but to also participate in the great race himself.

“The Tatts Finke Desert Race is one of those bucket list events that everyone should go to at least once,” said Tobin.

“It’s known as one of the toughest off-road courses anywhere in the world and to witness firsthand how the buggies and trophy trucks handle the terrain, especially through the whoops, will be unlike any other motorsport I’ve seen before. I’m seriously excited to be a part of it next week and to bring the event to all of our Weekend Sunrise viewers.”

Proudly supported by Tourism NT, the Weekend Sunrise broadcast will go to air live on Seven on Saturday June 7 and Sunday June 8 from 7am each day (AEST).

Tobin will navigate for Steven Sanderson in the #447 JAWS Racing Trophy Truck during Saturday’s prologue, before sharing navigating duties for Bruce Garland in the #750 Isuzu Motorsports MU-X on Sunday for the first leg of the Tatts Finke Desert Race. Garland’s regular navigator Harry Suzuki will take over for the return leg back to the finishline on Monday.

The Finke Desert Race is an off road, multi terrain two-day race for cars, buggies, bikes and quads through desert country from Alice Springs to the small Aputula (Finke) community and back. First run in 1976, this year marks the 39th running of the Finke – as it is commonly known – and is the second round of the five-event AORC calendar in 2014.