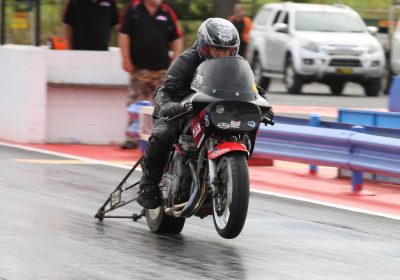 Round one of the 2018 Summit Racing Queensland Championships will hit Ironbark Raceway this weekend across March 31 to April 1.

This weekend’s event is the first of three rounds scheduled for the second-running of the championship and the chase for the copper ANDRA Xmas Trees.

“I wouldn’t say I am feeling the pressure to defend my title in this year’s Summit Racing Queensland Championships, we will just see what happens,” said Johnson, who is supported on-track by Mackay businesses Northside Motorcycles and Mobile Hose Fixers.

“In a step up from my campaign in last year’s series, I will be racing two bikes across two brackets (Modified Bike and Street Bike) this time around – I do this all the time at my home-track of Mackay so it won’t be an issue, I am looking forward to it.”

With a doubling of his racing miles, it is safe to say Johnson thinks favourably of the Summit Racing Queensland Championship concept.

“I think the format of the series is good and the double points at the end make sure there are some big curve balls thrown in which I like – last year it worked in my favour: I was outside the top five on the points after the second round and I went on to finish on top!” said the 46-year-old Warehouse Manager from Moranbah.

“The rounds have a good atmosphere and are nice and upbeat; it is good having a proper Queensland multi-track championship again.

“The tracks are all different and every track has its day you know – you just have to ride to the conditions, everyone has to race on the same track. It would be boring if they were all the same!”

As it did in 2017, the 2018 Summit Racing Queensland Championship will seek to develop and promote drag racing in regional Queensland, taking in Ironbark Raceway (Round One – 31st March-1 April), Palmyra Dragway (29-30 June) and Benaraby Raceway (22 September) in 2018. It is expected to attract racers from all over the State who wish to be crowned the ANDRA Queensland Champion for their class.