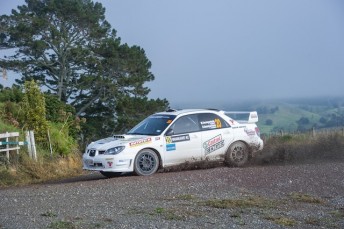 MEDIA RELEASE: rally – Rangiora rally driver Matt Summerfield is looking to continue his dream start to the Brian Green Property Group New Zealand Rally Championship at the second round of the series, Drivesouth Rally Otago, which runs this weekend.

Summerfield and co-driving sister Nicole come to the second round sitting in second place after a stunning start to the season at Whangarei in a new car for them, the ex-Richard Mason, Brad Ayling Subaru.

In the short gap between rounds, Summerfield has taken the opportunity to test a Supercar Lite-class Rallycross car in Australia.

With only one pass of reconnaissance, thee brother-sister duo will be hard at work in recce as they continue to write their own pace notes for the fifth consecutive year in preparation for any international opportunities.

Preparing the pace notes will be crucial to ensuring that Summerfield claims another solid haul of points, something that is critical to the team, who is looking at the big picture for the season.

“After such a solid start, we are looking to really build on that and bank some more points at Otago,” says Summerfield. “It was great to have the opportunity to drive the Supercar Lite between events, man that’s an awesome car and I really hope we get another shot behind the wheel.”

Matt Summerfield Rallisport would like to acknowledge their sponsors, without whom their 2015 campaign would not be possible: Castrol Edge, Autotech Services, North Canterbury Energy Centre, The Gearbox Company, Chatterton Builders, Liquorland, I C Frith Insurance Brokers and No Limit Construction.