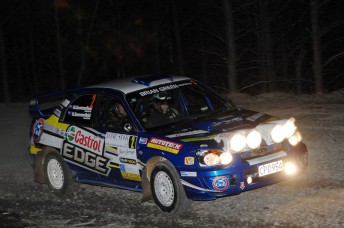 INZ at the fourth round, the Trusthouse Racetech Rally Wairarapa.

Summerfield and co-driving sister Nicole recorded a career best result at the opening round of the championship, Rally Whangarei, when the pair came home in second place. A consistent run at the second round, Rally Otago, despite some problems and a late swap to the team’s spare engine, meant they maintained the second place.

However a disastrous engine failure on their home rally, Rally Canterbury, saw them not only slip to third place in the championship, but also left their participation for the rest of the season in doubt.

However with the support of their loyal sponsors, New Zealand’s fastest brother and sister will return to the Wairarapa event confident that their engine issues have been resolved and ready to regain second place in the championship as well as battling to top the junior standings.

“I’m absolutely stoked that we can make it to Wairarapa, although it’s not ideal we can drop a round so we are still in the hunt for second in the championship,” says Matt. “Now that we have got to the bottom of the engine problems, I reckon we can have a good run and also fight for top junior.”

The Trusthouse Racetech Rally Wairarapa gets underway on Saturday June 28, leaving the infamous Tui Brewery in Mangatainoka from 7am. Crews will tackle nine stages totalling 163.18km of special stages before finishing back at the Solway Hotel in Masterton at 5.30pm.