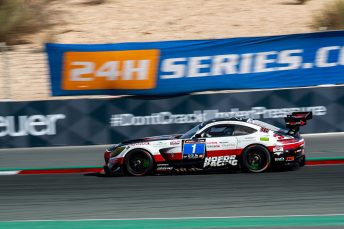 The Mercedes-AMG Customer Racing Team Hofor Racing defends its titles in the 24H Series: with third place in last weekend’s 24-hour race at Portimao, the Swiss team sealed the overall drivers’ and teams’ titles in the 24H Series. With the simultaneous class win in Portugal, drivers Michael Kroll, Chantal Kroll and Roland Eggimann (all SUI), Christiaan Frankenhout (NED) and Kenneth Heyer (GER) also scored further titles in the international endurance race series. Thus, the team from the Swiss canton of Aargau takes the teams’ and drivers’ championship crown in the A6 class for the second consecutive time after 2016.

Affalterbach – The battle for the championship remained thrilling until the final round of the 24H Series, the 24-hour race at Portimao. Hofor Racing and its drivers, however, proved to have strong nerves: with a commanding performance in the race twice around the clock, the defending champions not only drive their Mercedes-AMG GT3 with starting number 1 to the fourth class win of the season, but also scored their first outright podium finish by coming home third overall. With a tiny margin of two points, they wrapped up the overall drivers’ title and the GT teams’ category title. Eventually, Hofor Racing and its driver quintet of Michael Kroll, Chantal Kroll, Roland Eggimann, Christiaan Frankenhout and Kenneth Heyer managed to win every category in which they competed: Drivers overall, Drivers per class (A6), Drivers per sub class (A6-Am), Drivers GT cars, Drivers ladies (Chantal Kroll), Teams per class (A6), Teams per sub class (A6-Am), Teams GT cars.

A successful debut season with the Mercedes-AMG GT3

Having already tested the Mercedes-AMG GT3 as a successor for its SLS AMG GT3 in the 24H Series last year, Hofor Racing have relied on the new car from Affalterbach since the start of the 2017 season, and it did so with great success: in January, the five drivers, who raced together throughout the season, already won the A6-Am class in the Dubai 24 Hours (seventh place overall). Next up were a class win (fifth place overall) and a third place in class (fourth place overall) in the two twelve-hour races at Mugello and the Red Bull Ring. The 24H Paul Ricard then allowed the team to celebrate another first place in the A6-Am class (fifth overall). The team only had a single flaw in the Imola 12 Hours (sixth in class, 15th overall), a drop score for the championship anyway. The title win in the endurance series now crowns an outstanding team performance throughout the season.

And it doesn’t stop there: next to the 24H Series championship title, the Swiss team also still has a chance to win the Continents Championship of the endurance series. This year, the 24H Series is running this competition for the first time, taking the best result from Europe (Mugello, Red Bull Ring, Paul Ricard, Imola or Portimao), Asia (24H Dubai) and the result of the newly planned race with the 24H COTA USA (10-12 November) into account. Currently in second place, only one point down, Hofor Racing has a good perspective prior to the event in November.

Stefan Wendl, head of Mercedes-AMG Customer Racing: “Congratulations and the greatest respect to the Hofor Racing team and its drivers. Defending the 24H Series title from the previous year and even winning further class championship titles on top of that is an outstanding performance. I am also particularly happy with the fact that the team has coped so well with the Mercedes-AMG GT3 from the very beginning. After all, exactly that is our goal, that our car is driveable and competitive in the various GT3 series for professional and amateur drivers alike. Here, the basis for success also was the impressive reliability of the Mercedes-AMG GT3 throughout the season.”

Michael Kroll, Hofor Racing: “Thanks to the reliability of the Mercedes-AMG GT3 and the great support from HWA and the operating team Widberg Motorsports, we have again succeeded in winning the 24H Series championship title. Finishing on the overall podium was a nice way to conclude our campaign.”