Successful race weekend in The Netherlands!

Successful race weekend in The Netherlands! 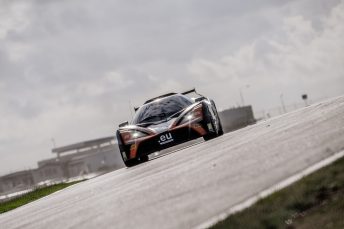 The REITER YOUNG STARS celebrated a great appearance at the DTM event in Zandvoort (NED) where the GT4 European Series Northern Cup Races were supporting the main programme! The juniors were able to pick up multiple podiums in two exciting and spectacular races and in doing so, illustrated the power and performance of the KTM X-BOW GT4 in very impressive fashion.

Things all went exceptionally well for the pairs of young drivers, as well as the university student teams supporting them during the race weekends. Mads Siljehaug (NOR) and Jamie Vandenbalck (BEL) of RYS Team InterNetX, finished a great second overall, while third place went to RYS Team KISKA with local Dutch hero Willem Meijer and Germany’s Lenny Marioneck at the wheel. This result put both teams in second and third in the “Silver Cup” classification.

The excellent performance of the KTM X-BOW GT4 was further underlined when the RYS Team Holinger Emil Westman (FIN)/Samuel Sladecka (SVK) finished fifth overall and the RYS Team True Racing, with Laura Kraihamer (AUT)/Cedric Freiburghaus (SUI) came home in ninth overall. In the separate PRO-AM classification, RYS Team Pankl, with Benjamin Mazatis (GER) and August Macbeth (USA) celebrated a third place podium , where in contrast, RYS Team Schönramer/Racecom with Eduard Anton (ROM) and Achim Mörtl (AUT) were very unlucky, because although they crossed the line first in the AM classification, they were later disqualified due to not spending the required time in the pits. Similarly, the Austrian duo Reinhard Kofler/Eike Angermayr (RYS Team KTM) came away without points after they were forced to retire due to a too close encounter with another car in the hard fought battle for the overall victory.

Then in Sunday’s second race, the two unlucky drivers from the previous day almost finished on the podium, and they would have succeeded but for a late safety car phase, which left Kofler/Angermayr in fourth. Willem Meijer and Lenny Marioneck put in another excellent performance to finish overall sixth, while the duo Laura Kraihamer/Cedric Freiburghaus were eighth overall. Successfully Benjamin Mazatis & August Macbeth scored second place in the PRO-AM classification, giving the entire Reiter Engineering group reason to celebrate another podium.

Mads Siljehaug continues to lead in the REITER YOUNG STARS overall standings, while thanks to his consistently good results in Zandvoort, Lenny Marioneck is now his closest rival. The German driver will certainly be doing everything to overtake Siljehaug at his home race, the RYS finale at the Nürburgring. Jamie Vandenbalck is still in with a chance, whereas Eike Angermayr, who is now fourth, has dropped back a bit but might still be able to have a say in the final ranking. Stay tuned for the season finale in one month’s time!