It was an ultra-successful international excursion for the Australian-based Comiskey Motorsports crew as they battled the world’s best off-road racers in some of the most challenging terrain available. 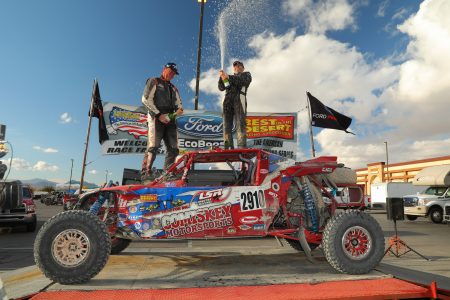 Kicking off their international assault at the world renowned Score Baja 1000 event in Mexico, the three-driver combination lined up against the best in the world in their Lonestar Racing built and One Gear Racing prepared Can-Am X3 Max.

With Carr kicking off the race and driving to the 285 mile mark, followed by Comiskey tackling the silt to the 535 mile mark, it was Mckenzie who took the reigns for the final stint to bring the car home and cap off a mammoth team effort.

“It was such a great result for our team, we couldn’t be happier,” said Comiskey.

“The team was quite new and we only met a few new members days before the race. We all worked unreal together, everyone did their job and performed at an unbelievable level, so we’re super pumped with the team and our result.

“We also have to say a huge thanks to our navigators Nick Granlund, Jerod Blizer and Matt Shrive. With both race and public traffic scattered across the already challenging course, these guys played a huge role in our success at Baja.”

Although it was a successful run for the Australian trio of drivers and their crew, Mckenzie admits that their success didn’t come without a list of challenges being thrown at them along the way.

“It was exhausting and the night silt stages were just insane with the relentless silt and dust,” he explained.

“We’re also all from Queensland and we weren’t quite ready for how cold it would get, so those night stages were definitely a challenge for all of us.”

Reaching speeds in excess of 90 mph in the faster sections of the circuit, top-level equipment and preparation proved vital in the team’s ability to remain in the race and battle for a podium position.

“The car was prepped really well and to the highest standard by Kevin Shrive, which enabled us to finish the race,” he explained. “Our BFGoodrich tyres were unreal, they didn’t put a foot wrong and they made the car really controllable. The speed of the car was also great thanks to KWI Clutching and the tune from EVO Powersports made it possible for us to get up on top of the whoops in the tough conditions.”
Upholding the light hearted Australian approach, the team also drove their standard Can-Am four seater, equipped with King Suspension and BFGoodrich tyres in an unusual choice of attire.

“We actually pre-ran the sections in a bunny suit from Walmart,” Mckenzie laughs.

“We did that to distinguish who the driver was and for a bit of fun, but I think a bit of a trend may have kicked off!

“We received a lot of strange looks, but it was all in good fun and we stayed warm, which was a bonus.”

Wrapping up their international tour at the round 7 of the Best in the desert championship Parhrump Nugget 250 Nevada, the team saw themselves achieve continued success at the Laughlin Night Classic, UTV World Championship.

“The Laughlin Night Classic was a great one for us and we were able to show the Americans what we’re capable of,” Mckenzie commented.

“We’ve been developing our car setup this year and it has been an ongoing process, but it’s at a really good level now and we’re feeling great.”

The team steered their Can-Am X3 Max to the overall victory in the Best in the desert UTV Unlimited category, which was the perfect way to cap off their strong showing in unfamiliar territory.

Mckenzie again commended the efforts of the entire team on their success, admitting that the extensive time spent together has created a family-like environment under the Comiskey Motorsports awning.

“The team has really come together as one and we’re like a little family now,” he added. “Living in each others pockets for so long, you get to know one another very well and everything’s working out just perfect.”