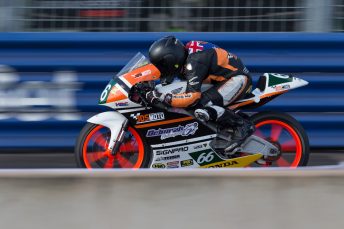 As the ten riders took off from the start line, it would be Kelso (Deborah Motorsports, Honda NSFR250) to dominate in class for victory. Kelso managed to build a four and a half second gap to his nearest opposition. He also posted the fastest lap of the race, a 1:14.666 to smash the previous record. The top three finishers were the obvious standouts, with a significant gap to the fourth place getter.

Dylan Whiteside (Aussie Crane Trucks, Honda NSFR250) was Kelso’s greatest challenger in second position. If there was a potential threat to Kelso, it could be Whiteside in Sunday’s upcoming races.

Dallas Skeer (Penrite Oils, Honda NSFR250) was consistent on the tarmac and was the final podium placer.

Warwick Price backed up the pace he showed in yesterday’s practice sessions to take pole position for the Motorsports NT Club Challenge class from his time in Qualifying Two. Price (Yamaha YZF-R6) posted a 1:16.808 to go top of the timesheets. Price qualified in front of Matt Edwards (Triumph Daytona 675R) and Douglas Clark (Suzuki GSX-R1000).

Race One was dominated by Matt Edwards (Triumph Daytona 675R), as he finished approximately nine seconds in front of his closest challenger Douglas Clark (Suzuki GSXR 1000). After Price and Clark dominated yesterday’s practice sessions, Edwards managed to turn the tables on his fellow rivals.

In third place was pole sitter Price, who battled with Clark for second place on the podium. Price would only miss out on the second place by close to half a second.