Subaru Do: Can Do In Canberra

Subaru Do: Can Do In Canberra 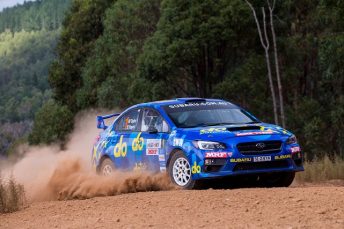 2017 Forest Rally: Molly Taylor and Bill Hayes in action during Round 2 of the CAMS Australian Rally Championship.

Subaru do Motorsport team is aiming to replicate its success in the West when it resumes action in the National Capital Rally this weekend (May 28-29).

Currently second in the CAMS Australian Rally Championship (ARC), after dominating both heats of the Make Smoking History Forest Rally in Western Australia last month, the Subaru do Motorsport duo of Molly Taylor and co-driver Bill Hayes are in fine form heading into the mid-season event, the season’s third round.

The pair’s Production Rally Car (PRC) class All-Wheel Drive WRX STI has proven a potent package in pre-event testing and the prospect of performing on an international stage – the rally is also the second round of the Asia-Pacific Rally Championship – has the team fully focused on another podium finish.

Molly said: “Heat one on Saturday brings some new challenges, with one all-new stage and all the others running in the opposite direction to last year, so the same but different!

“It means that effectively about half the rally is different to last year in some form.

“The two heats are also like doing completely different events, with Saturday generally being fast and flowing and Sunday’s Heat Two more technical, twisty and narrow.

“Other than winning the championship at Coffs Harbour last November, Forest Rally was our best since joining the series and we’re very keen to maintain the momentum.

“There’s a good vibe right across the Les Walkden Rally team, which prepares the car, so we’re feeling excited and positive going into Canberra.”

The National Capital Rally covers 14 competitive stages, with eight on Saturday’s Heat One across 54.05 competitive kilometres and six on Heat Two across 60.46 kilometres.