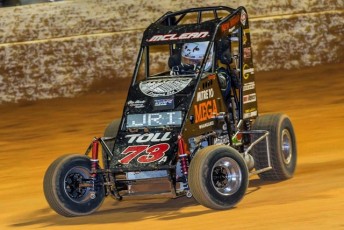 As the 2014-15 season comes to a close Whangarei driver Thomas McLean leaves behind a stunner of a second season driving in the Three Quarter Midgets series which has taken him all around the country.

Last season he won Rookie of the Year and placed first in the B Grade but with a new car for 2014-15 he has quickly moved into the top ranks of the category never stepping outside of the top 10 and taking multiple race wins.

“I think the highlight of my season was winning at Baypark because it was the first time the TQs had been there so it was one to go down in the history books,” said McLean. 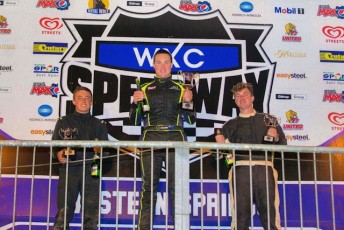 Baypark Speedway was his second ever win in a feature race which came hot on the heels of his first all out victory in January where he was crowned the King Country TQ Midget Champion at Kihikihi Speedway.

“Having those wins really boosts your confidence when you know that you can really beat those guys.” said McLean.

McLean’s most significant event of the season was the Nationals held in Greymouth at the Greenstone Park Speedway this year which attracted an entry list of 48 drivers from around New Zealand for the annual meeting.

McLean finished sixth out of the entire field which was based on accumulated points over a series of races throughout the day rather than having the final feature race producing the overall winner.

Perhaps McLean’s most exciting win was taking out the North Island Championship at Western Springs where in the feature race he dominated the rest of the field by thinking outside the box.

Studying the ever evolving circuit at the Springs in the heats he drive-tested a very wide line through Pinetree Corner which he then adopted in the feature to literally catapult himself ahead of and far beyond the leading drivers to take the overall win to a shocked but excited crowd.

McLean then finished of the season in style where just two weeks ago he placed third overall at the final of the Western Springs TQ Midget Series.

The result was based on points won over the entire season at the iconic speedway stadium.

McLean competed at an exhibition race held at his local Whangarei Speedway last weekend and will hang up his helmet until the next season kicks in again around October.

At this stage McLean plans on another two or three seasons in the TQ Midgets while summing up his options for the future where he has long held aspirations to compete in the USA.