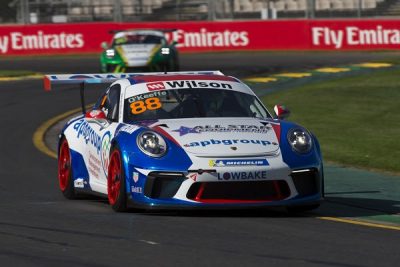 APB Group Porsche 911 driver Dylan O’Keeffe finished off a rollercoaster weekend at the Australian Grand Prix with a stunning drive to second in the weekend’s final race.

After recording the second-fastest time in practice, O’Keeffe struggled with a car balance issue in qualifying, finishing 10th.

A speedy start from the 20-year-old in Race 2 saw him overtaking two cars before the first corner, but a tap from another competitor on the exit of turn 2 saw him rotating off the circuit and falling to the rear of the field.

Fortunately, a Safety Car enabled him to catch up to the pack and at the restart, he staged a determined recovery drive to 11th.

Another solid performance followed in Race 3 – O’Keeffe improving to seventh – before he capitalised on some drama at the start of Race 4 and moved up to fourth straight away, before fighting his way past Nick McBride and Jordan Love to finish second.

O’Keeffe was happy to finish fourth for the round after the up-and-down weekend.

“It was very much a weekend of highs and lows, and it took us until the last race to get back into a position representative of our pace,” O’Keeffe said.

“Once we resolved the problem with the car from qualifying, we were just as fast as the front-runners but with the cars so evenly-matched, overtaking is difficult.

“It was disappointing to get spun off the track in Race 2 but fortunately the car wasn’t damaged and we were able to recover well.

“Race 3 was solid and in Race 4, I was aiming for a top-four finish but when some of the other drivers collided at the first corner, it made my job easier.

“Coming second in the last race was an important result to maximise our points haul for the weekend, and I’m thankful to have maintained my top-four position in the series standings,” O’Keeffe concluded.

Dylan O’Keeffe will next be on track in the first Australian GT Endurance Championship round on 14-15 April at Tailem Bend, where he will drive alongside Ash Samadi in an Audi R8.