Plus IT backed South Australian racer George Gutierrez enjoyed solid results in the second round of the Toyota 86 Racing Series up in Townsville as part of the support card for the Virgin Australia Supercars Championship. 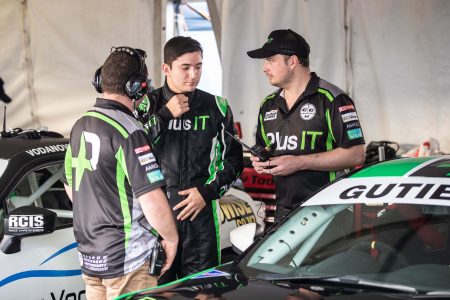 Gutierrez showed that the hard work since Phillip Island had been worthwhile by hustling his Toyota 86 during qualifying to start the opening race of the weekend from fifth at the tight concrete-lined street circuit which is notoriously difficult for passing.

The Adelaide based racer then backed up that performance with a sixth-place finish amongst the highly competitive 33 car field in the opening race of the weekend after a lengthy battle with fellow Paul Morris trained drivers, Luke Vanna and Declan Fraser.

In a tough street fight during race two, Gutierrez ran wide while trying to push forward, to drop a couple of places and finish the second Townsville race eighth. A position that he maintained whilst in another tough scrap during the final race of the weekend.

Ending the second round-up in Townsville with a 6th and two 8th place results and a strong championship points haul.

“Honestly, when I sit back and look at the result, I’m super proud of what we managed to achieve in Townsville”. said Gutierrez.

“It’s such a nice feeling being able to reward everyone’s hard work behind the scenes with some good results. I’m very grateful for everyone’s support and commitment.”

“Now our attention turns to making sure we can deliver yet again at Bathurst and try to get on that podium.”

“Massive thank you to Plus IT and all my sponsors. Without them, we would’ve been able to achieve these results.”

Gutierrez and his family-run team will now look to improve performance ahead for the next round of the Toyota 86 Racing Series at the iconic Mt Panorama circuit in Bathurst in October.