Strong start to the year for B-Quik in Adelaide

Strong start to the year for B-Quik in Adelaide 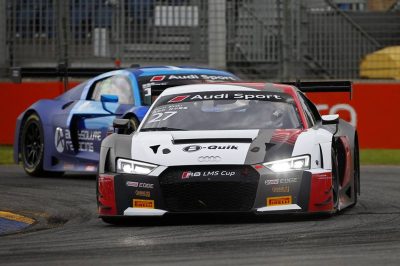 A very competitive weekend to get the new racing season underway as B-Quik Racing made a one-off return to the Audi Sport R8 LMS Cup for its first round of year, which took the Asian ‘one make’ series onto the streets of Adelaide, the circuit that’s famously the former home of the Australian F1 Grand Prix, for the first time.

Daniel Bilski was the natural fit to drive the #27 B-Quik Audi R8 LMS drive as he’s a former double champion in the “R8 Cup” series having claimed the hotly-contested Amateur class title in 2015 and then the Masters crown in 2016.

However, the Australian would be behind the wheel of the new-generation Audi R8 LMS for the first time in the “Cup” series – although he had driven this GT3 car once before, in 2016, during an endurance round of the Australian GT Championship endurance race where he teamed up with legendary Australian racer Garth Tander, the pair finishing an impressive third overall.

It would also be his first time on this street circuit.

The seventh season of the “R8 Cup” marked the first time the Audi Sport-organised championship had visited Australia and for the weekend it was supporting the Supercars Championship’s “Adelaide 500”. That meant there were big crowds all around the track – in fact the ticket sales put it at 75,000 spectators on Saturday and 90,000 on Sunday – while an action-packed programme played out on track.

After some acclimatisation running last Thursday Daniel faced two qualifying sessions come the Friday on the 3.219 km/14-turn Adelaide Street Circuit, which is laid out in the city’s Victoria Park – and where there is simply no room for any error.

The street circuit is recognised worldwide after playing host to the Australian F1 Grand Prix between 1985 and 1995 and since 1999 it has been the home of the “Adelaide 500”.

The first qualifying session, to decide the grid for Race 1, went well with Daniel getting to grips with car and track superbly to qualify in P8, however a technical issue struck during the second qualifying session leaving the car down on power and that left Daniel facing a row six starting spot for Race 2 – and a mountain to climb.

It turned out to be an excellent first race for Daniel as he steered clear of the walls and worked his way up to P6 by the time the chequered flag came out.

However, for Race 2 he would be starting from down in P12 on the grid meaning he was going to have to really dig in if he was to battle his way to a position inside the top ten. Daniel read the script, did what any B-Quik driver always does and tenaciously set about catching and passing cars, not easy on this narrow, barrier-lined course.

After a superb drive he looked to be on course to match his P6 of the day before until a competitor further behind completely missed his braking point and punted the #27 Audi out of the race on the final lap. A disappointment for sure, but certainly not enough to take the shine off an excellent weekend.

Daniel Bilski: “I thoroughly enjoyed Race 1 and was very pleased with a P6 finish after starting P8. The team did a great job overnight to have the car in top shape. I had a good start and was impressed that everyone got through T1 and T2 cleanly. It was a tough but clean race all the way to the flag. It’s a very challenging circuit, but also very enjoyable. The car was awesome but the tyres screamed enough towards the end so I had to play smart and focus on being clean and consistent. For Race 2 our qualifying issues meant I had a hard task ahead. I had a clean start and quickly got into a good rhythm in the car. It was exhilarating pulling off a few clean overtakes on such a tough street track and I was thoroughly enjoying the awesome car and the circuit, putting together fast clean laps. But ultimately the race ended badly. I was in P8 on the last lap when two cars in front of me came together, which meant I had a good shot at P6, however, just as I was about to pass the cars ahead, a car two places further back missed his braking point after the fast back straight and T-boned me at the hairpin. We were out on the spot. A frustrating end to what had been a good race.”