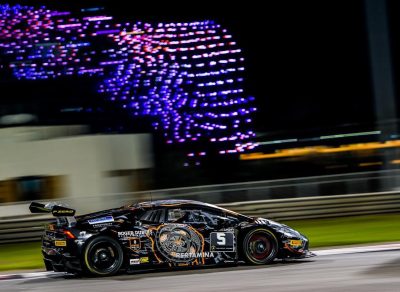 Aidan Read scored an impressive second position on his debut in the Super Trofeo Middle East championship with FFF Racing by ACM, the perfect warmup ahead of his main programme for the year in the Blancpain GT Series Asia. At a venue that was all new to the Australian racer, he was unfortunate not to double up with a similar result in both races of the weekend.

Finding his feet quickly Aidan looked anything but a novice in the category and debutant at the Yas Marina F1 circuit, qualifying the car a creditable fourth and racing the Lamborghini hard to maintain his position in touch with the leaders in the opening race.

Handing over to returning Middle East competitor and teammate Jack Bartholomew at the mid-point, Read’s British teammate soon made ground through the Amateur traffic and looked well set for second position only for a mechanical issue to relegate the pair to fourth overall.

Saturday’s second race saw Read welcome his guests from Prosperity Investment Management to the track and he was keen to gain the result that was denied the previous day.

Staring from the front row, teammate Bartholomew had a solid stint but lost out to the race one winner Rik Breukers at the start, handing the car to Aidan in third place. Aidan then set up a great result moving quickly into second position and keeping the pressure on Lamborghini World Champion Riccardo Agostini to the chequered flag.

With trophy in hand, Aidan was naturally pleased with the weekend’s result: “I have to be satisfied; I got to grips with a car that is quite different to the GT3 Huracan I drove last year and at a track I had never seen before. So, to be competitive with the quick guys at the front is most satisfying. I loved the track and enjoyed the Super Trofeo car enormously. We got a second place and really should have had a pair of them racing well with Jack, so, it’s nice to start the season with a podium.”

Aidan will now turn his attention to the main focus of his upcoming GT3 season, choosing not to compete in the remaining rounds of the Super Trofeo Middle East Series. Details of this and an exciting new challenge for the Perth youngster will be announced in the coming weeks.