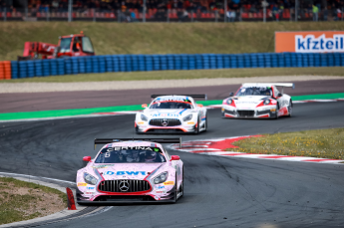 Young driver Luca Stolz (GER) scores a junior class podium finish in the ADAC GT Masters season opener: in the first race at the Motorsport Arena Oschersleben, the 21-year-old driver of the Mercedes-AMG Team Zakspeed finishes second in the category for young drivers as well as eighth overall, together with stalwart Luca Ludwig (GER). Customer Racing Team BWT Mücke Motorsport had the best-placed Mercedes-AMG GT3 in the overall classification with the duo of Stefan Mücke and Sebastian Asch (both GER) in sixth place. In the second race on Sunday afternoon, the teams again scored a pair of top 10 results: the #48 Mercedes-AMG Team HTP Motorsport finishes sixth followed by the #21 Mercedes-AMG Team Zakspeed in eighth place.

AMG with starting number #48 sixth on the grid as the best-placed car from Affalterbach, but was dropped ten positions on the starting grid following a penalty incurred in practice. In the race on Saturday, Luca Stolz (starting number #21) convinced with second place in the junior class for the Mercedes-AMG Team Zakspeed. The 21-year-old shared driving duties with stalwart Luca Ludwig, who celebrated his 100 ADAC GT Masters race start this weekend. The best-placed Mercedes-AMG GT3 in the overall classification was the Customer Racing Team BWT Mücke Motorsport entry with starting number #26 and driver pairing Stefan Mücke and Sebastian Asch. From twelfth place on the grid, the two made significant progress during the one-hour race and eventually finished in sixth place overall.

The second race of the weekend on Sunday was a similar affair for the Mercedes-AMG GT3: the necessary bit of racing luck was lacking and the final fine-tuning is something that still has to be found for the upcoming races. Once again, a junior secured a good result as Indy Dontje and his team-mate Marvin Kirchhöfer (GER) finished sixth with the #48 Mercedes-AMG Team HTP Motorsport Mercedes-AMG GT3. Two places further down, the #21 Mercedes-AMG Team Zakspeed entry with Luca Stolz and Luca Ludwig scored the second top 10 result and collected more points for the ADAC GT Masters standings.

Maximilian Götz, Mercedes-AMG Team HTP Motorsport #84: “Unfortunately, a better result was beyond reach for us following contact on Saturday. On Sunday, I had a good start and I was able to make up one place right away. After the pit stop, we were in a really good position with sixth place, but unfortunately, we were unable to bring this result home after another contact. Now, we will be attacking again at the Lausitzring in three weeks’ time.”

Indy Dontje, Mercedes-AMG Team HTP Motorsport #48: “A slight error unfortunately made us drop back a little bit on Saturday. However, Marvin and I are a great team, which we have shown in the second race. We were the best-placed Mercedes-AMG GT3 in the field with sixth place. That is a good performance for the season opener.”

Luca Stolz, Mercedes-AMG Team Zakspeed #21: “This weekend, we gradually worked our way up. Our goal for the next races has to be that we already can lay the foundation with a better result in qualifying. From 15th place on the grid, eighth place in the second race was the maximum we could achieve.”