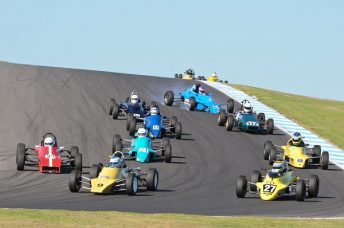 A bumper field of 36 historic Formula Fords will line up to celebrate the 50th anniversary of international Formula Ford racing at the Sydney Classic Speed Festival, 10-11 June.

Formula Ford was conceived in England in 1967, and quickly evolved into a popular junior development category all over the world. It made its first appearance in Australia in 1969, and quickly earned a reputation as the primary stepping stone for young drivers aspiring to forge a professional career in motorsport.

One of the most appealing aspects of Formula Ford was the ease and cost-effectiveness at which chassis builders could construct cars, and this was demonstrated in the variety of chassis that participated in Formula Ford races throughout the 1970s and ‘80s. Some chassis were imported, while some were locally-built, and a number of different brands will be represented at the Sydney Classic Speed Festival including:

The race meeting has also attracted a number of well-credentialed drivers from all over Australia including:

Other front-runners are likely to include experienced racers Andrew McInnes, Mark Lowing and Andrew Nethercote.

The event will consist of qualifying and Race 1 on Saturday, and Races 2 and 3 on Sunday.

There will also be a commemorative dinner on the Saturday night of the event, with entertainment including footage of historic Formula Ford races, and Q and A sessions with past Australian Formula Ford Champions.