Strong fields of Sprintcars and Midgets for Brisbane

Strong fields of Sprintcars and Midgets for Brisbane 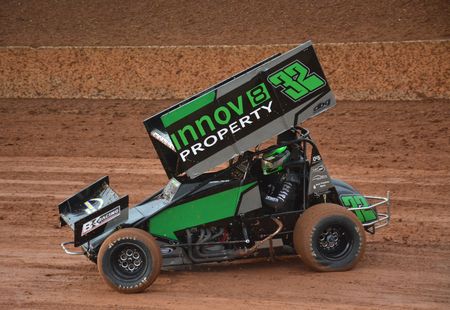 So far this season, two drivers have completely dominated the East Coast Logistics Sprintcar Track Championship and round six this Saturday night (December 11) will be the final chance for teams to fine-tune preparations in readiness for a hectic post-Christmas schedule that includes the Speedway Australia State Series (see separate release), incorporating the $10 000-to-win Titan Garages Brisbane Open. There are literally no other opportunities for one or more of the other 20+ competitors to break the stranglehold that Lachlan McHugh and Luke Oldfield have on the championship and prove that they will be a force in the big races that lay ahead. Also on another packed program this weekend will be the biggest field yet of Petzyo Development Sprintcars, along with round three of the TFH Midget Series and round four of the Shock Absorber Therapy AMCA Nationals Track Championship, plus Wingless Sprints and Compact Speedcars.

At Archerfield this season, McHugh and Oldfield have scored two feature race wins apiece, with Tasmania’s Jock Goodyer taking the other, leaving so many drivers with so little to show for their efforts thus far. In a run of success that certainly extends beyond their efforts in Brisbane, McHugh and Oldfield finished on the podium yet again last Saturday night in Toowoomba, finishing first and third respectively in the main event with Goodyer again offering the only resistance to complete the podium.

After suffering a few setbacks in the early rounds, Aaron Kelly has stepped up in recent weeks and finished a fine second behind McHugh at the previous ECL series round to become one of only four others in the field to feature on the podium so far this season. Cody Maroske has done it on two occasions and Tim Farrell is the only other driver in the field to have achieved a podium appearance, so perhaps it is this trio who offer the best chance of bringing an end to the McHugh/Oldfield domination. Others such as Ryan Newton, Brent Kratzmann, Adam Butler, Randy Morgan, Darren Jensen and Jy Corbet have enjoyed fleeting moments in the spotlight thus far, but none have been able to get the job done come feature race time.

An 11-car field has nominated for the Petzyo Development Sprintcars and it is particularly exciting to see Cairns veteran Leigh Holman amongst the entries. With a wealth of experience and an exceptional record of success, Holman is arguably the best driver to emanate from the far north of the state and he is one of three drivers making the trek from the tropics to compete this weekend. The Development Series pitches low budget and/or inexperienced competitors against those utilising smaller engine capacities, such as the increasingly popular 378ci LS engine that Holman will have at his disposal.

Despite the absence of a few series regulars, numbers remain strong in the Midget ranks for the third round of their track championship. Charlie Brown and Jayden Peacock have shared the spoils in the two completed TFH feature races thus far this season, but the two subsequently found themselves in the spotlight for the wrong reasons at Toowoomba in the wake of their successes. On that occasion, Brown was serving up one of his typical highline runs at the front of the field and looked on track for his second feature race win of the season until he was hit by the second-placed Peacock, putting both cars out of action and enabling Rusty Whittaker to grab the win. Wingless Sprint convert Casey O’Connell heads into this fixture fresh from a maiden feature race success last weekend and, with a sextet of proven feature race winners in Michael Kendall, Brock Dean, Brad Dawson, Brendan Palmer, Darren Vine and Scott Farmer also in the field, combined with strong form from the likes of Rob Stewart and Cal Whatmore, it is no way an exaggeration to declare that half the field are genuine podium contenders, which sets the scene for some epic action.

With the opening few shows having been dominated by the usual suspects in Bruce Marshall, Steve Price and Steve Potts, the appearance of some new names amongst the results at the most recent round of the Shock Absorber Therapy AMCA Nationals Track Championship certainly sends a message that the top guns cannot afford a skerrick of complacency if they intend to maintain their position. The previous round saw the likes of Peter Greer, Graeme Holland, Scott Hitchcock and Maverick Dack amongst those to emerge with wins and/or podium results in the heats and feature races.

Last start feature winner Robert Mazzer looks hard to beat in the Wingless Sprint feature race given his dominant display at the previous round two weeks ago, although there seems little doubt the track conditions will be somewhat different this weekend, which might bring him back to the field, from which Ben Manson, Andrew Robinson, Jamie Usher, Liam Atkinson and Stuart Jefferies loom as his biggest threats.

Compact Speedcar numbers are on the rise and if all nominated competitors turn up, they will have their biggest field for quite a while, with Andy Kimm an interesting addition to the ranks, having prevailed in the Lightning Sprint feature race at the last meeting.

Gates open at 2.30pm for online ticketholders, with general admission from 4.00pm. Early racing gets underway at 4.30pm, with the main program scheduled from 6.00pm.