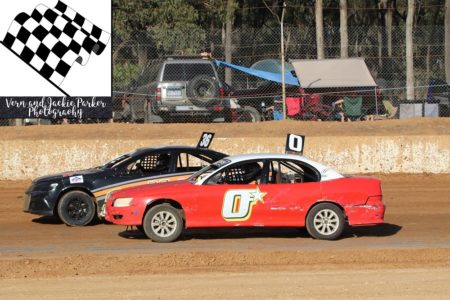 The Rushworth Speedway hosted the Victorian Street Stock Series along with their local race action and the visiting Victorian Speedway Council Sport Sedans and a terrific forty lap final for the Street Stocks closed out the night with Melbourne race Mick Dann taking a long awaited victory in front of Bendigo and Rushworth fan favourite Jamie Lock and Allen Treble from nearby Nagambie.

In other action the Bendigo based Lamb family who are taking a sabbatical from the sport won both the Open Saloon final with Paul Lamb and the Ladies Saloons with Kelly Lamb. Braden Claridge won the Junior Sedans, Jamie Paull the Sports Sedans and Mick Boyle the Production Sedans.

Six qualifying races in the Street Stocks determined where drivers would start the final with Zoey Salau a Goulburn Valley and Swan Hill member winning the first qualifier ahead of Lock. South Australian Jason Duell had a win in the second then Andrew Jordan, Lock, Dann and Greg Parks all won heat race action before the important Grand in the Hand final with $1000 to the winner.

Duell top qualified the family freight company owner stopping at Rushworth on route to Cairns in Queensland then knocked back a prize offer to start at the rear of the field. Lock knocked back the same offer and started alongside in second spot. Nathan Dunn a Bendigo racer also, started in third spot with a terrific qualifying run through the night with Tim Hutchinson, Dann and Parks rounding out the top six starters.

Duell led early when the green flag dropped. Hutchinson briefly passed by Lock for second. Dunn and Parks were having a red hot go of things in the top six before Lock took the lead on lap seven with Dann following him past Duell before the first twenty laps finished racing in the clockwise direction. The cars then spun around and headed anti-clockwise for the final twenty laps.

Salau started to make her move forward from tenth spot and Treble who started in thirteenth was seventh as the cars switched direction. Dann took the lead from the first lap of the second half of the race which was lap twenty-one. Treble was in sixth spot at this point with a run still to come for him. With ten to run Salau was seventh and Treble in fourth. Dann still lead Lock and Duell before Treble took third with three laps to run and Salau moved to fifth ahead of Parks with two to go.

In an exciting finish Dann stretched his small margin between he and Lock and as his father and partner looked on after a drought since his last feature win, Dann went on to defeat Lock, Treble, Duell and Salau in the Grand in the Hand.

Kelly Lamb made a clean sweep of the Ladies Saloon racing winning both the heat races and the final. The final was terrific as Jas Bergman made a run for it late in the race and Lamb held on for a less than a second victory margin. Larissa Ahearn finished in third, Nicole Gapes fourth and Renah Pollard was fifth.

Bradin Claridge won both heat races and the final for the Junior Sedans after earlier in the night his brother Connor crashed out when caught by another competitor in an unintentional incident. Claridge won the final from Keiden Britton, Jordan Simmonds, Jordyn Tewksbury and Mia Martin.

Mick Boyle won two heat races in Production Sedans and Andrew Ahearn the other before a terrific final that seen Shane Hutchins and Ahearn close together throughout the race in second and third. Boyle was comfortable at the front of the race and he went on to win from Hutchins, Ahearn, Leigh Jeffery and Steve Ellis.

In Open Saloon action six races determined starting spots for the final event with Jaidyn Dredge, Paul Lamb, Wayne Gilsenan, Mark Bergmann, Braiden Simmonds and Lamb a second time winning the qualifiers. Lamb, Peter Welch, Simmonds, Dredge, Troy Britton and Josh Beattie then started in the top six spots of the final for the fifteen-lap race with Gilsenan winding back the clock back to the nineties as he challenged Lamb whilst in second spot. Wilson got past and into second and Gilsenan and Dredge had a scrap and a race stoppage that stewards deemed Gilsenan the primary cause of then resulted in Gilsenan going back to last place.

Welch after drifting backwards early in the race then turned things around and started his way forward and eventually into second place once again. A late surge by Welch into turn three caught up to less than a second behind Lamb however the chequered flag unfurled and Lamb took the in from Welch and Simmonds, Dredge and Britton before confirming he and the family are indeed sitting out from the sport at this time.

Regular visitor to Rushworth Jamie Paull who normally is competing at the track in an Open Wheel race car brought his Sedan to take wins in the Sports Sedans. Paull was too good in qualifying and then won the final with a decisive margin from Lucas Walker, Marc Hanson, Kate Meyer and Marcus Griffith rounding out the top five.