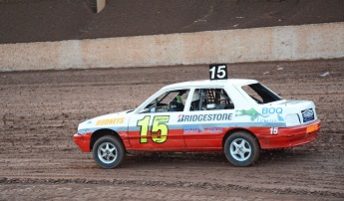 Current national champion Shaun Davoodi heads the list of nominations for the Street Stocker title chase and, as one of only three drivers in the field who collected a heat win at the first attempt to stage this event before rained curtailed the feature race, the Sydney-based racer heads into the weekend as the man to beat. However, the driver Davoodi deposed to take the national crown in Blake Everleigh is also in the field and no doubt determined to upstage his national title nemesis. Add current Sydney Street Stocker Club Championship winner Andrew Espener into the mix, along with the likes of Shane Carlson and Steve Hall from Newcastle plus a Lismore-based squad comprising Luke Gray, Daniel Lindsay, Josh Donnelly, Jessica Turner, David Putsey and Jamie Smith, and the scene is set for a battle royale in the race to be first ever Queensland champion. Interestingly, the only Queensland-based driver in the field will be Peter Thompson, so he will hoping for strong support from local fans in his bid to repel the interstate invasion.

The field to contest the Queensland RSA Junior Sedan Championship will see two locals take on another primarily NSW-based field, with Casey O’Connell and Bodhi Russ carrying home state hopes on their young shoulders. Of the drivers nominated for the title showdown, Connor Reeves, Matthew Weir, Ryley Smith and Josh Weir were the best performed at their previous Archerfield outing in May, all finishing the feature race inside the top five, which suggests they might be the drivers to watch again this Saturday night.

Modlites have produced good numbers for their season opener and Queensland champ Terry Leerentveld will again be the benchmark the other 17 drivers will need to reach if they are to challenge for feature race honours. Of the regular runners, expect Scott Lehfeldt, Klinton Hancey, Sean Rose and former state titleholder Will Butler to be lurking near the front of the field, while the addition of five-times New Zealand Midget champion Michael Kendall (who also has multiple Polar Ice Archerfield Midget track championships to his name) adds plenty of spice. Former Dirt Modified racer Dallas Czerwinski has downsized to Modlites and is another who might upset the established order.

The Wingless Sprint supremo Adam Butler one of several drivers taking the step up into Sprintcars this season, Saturday night is the first opportunity for drivers to stake their claim as the new big dog in the battle for the Ian Boettcher Race Parts Club Championship. If experience and results count for anything (and they most certainly do), Cody O’Connell, Brian Dixon and Brant Chandler look very likely contenders.

Although the field is small, the battle for Lightning Sprint feature race honours might prove the most competitive of all as a trio of national/state championship winners in Dave Fanning, Sean Iacono and Keith Blatch are joined by siblings Aaron and Kirsty Kelly in taking on Australian champion Kurt Wilson.

Gates open at 4.00pm and early racing kicks off at 4.45pm, with the main program getting underway from 6.00pm.