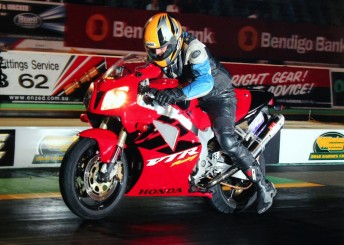 Paul Astridge is currently
leading the Street Bike
standings heading to its penultimate round this
weekend at Willowbank Raceway. Pic: dragphotos.com.au

When 2011 Street Bike champion Paul Astridge heads to Willowbank Raceway this weekend (Saturday 4 October) for the penultimate round of the Street Series, he will be looking to make the most of a lucky break which saw his championship points lead remain intact despite a substantially unlucky mechanical issue in July.

Astridge lead the Street Bike field to the Raceway on his 1000cc Honda VTRSP1 for July’s round of the Street Series, and while his points buffer benefited from the event, his bike did not. With at least a month on the sidelines for repairs on the cards, Astridge was left lamenting a championship opportunity lost – that is, before the weather gods intervened.

“At the end of the July Street Series round, a scary amount of my bike’s clutch ended up residing in its sump!” said Astridge, a leading hand in an aluminium extrusion workshop from Coominya in Queensland.

“To that point I had made three finals out of the four run to that point, winning two of those and holding a points lead with a nice margin, but I wasn’t relaxed at all as – as we have seen – it isn’t hard to come tumbling down from the top much quicker than you can get there!

“That damage was a big letdown for me at the time, as I was sure to miss the next event while making repairs and it was looking so tough to have to watch the points lead I had built-up evaporate unchallenged. 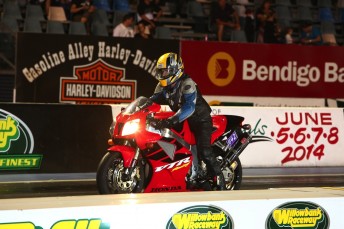 Astridge on his way to victory in the Street Series earlier this year at Willowbank Raceway. Pic: dragphotos.com.au

“However I had a lucky break with the August round being rained out, which allowed me sufficient time to repair my bike and get back on-track in time for the September event – meaning I had not missed any rounds of competition!”

Now, Astridge is determined to make the best of his good fortune, and with a guaranteed spot in the Street Bike Top Eight Shootout – scheduled for October 25 – is prepared to lay it all on the line this weekend.

“It is kind of ironic how this has played out, as in 2011 I had a clutch failure around the same time and lost one event because of it – I went on to win the series that year so hopefully there is a pattern forming!” said Astridge, a former drag racing photographer who has been around the sport for 40 years while racing on and off for 11 seasons.

“While I bowed out in round two of September’s event by beating myself with a 0.01 second red light, I still have the points lead and a guaranteed place in the shootout.

“The bike is also back on-track performance wise following its repairs, and while it might be a tense time as the penultimate round and the shootout draw closer, I can’t wait!

“The last few months have really demonstrated the highs and lows of this great sport of ours, and you can be sure I will be doing everything I can to make sure this season ends on a high!”

Astridge will be joined on-track at Willowbank Raceway this Saturday by more than 100 racers fighting it out for Street Bike, Street Sedan and Powder Puff (ladies only) honours, with the top eight in the points following this weekend to progress to the Top Eight Shootout which will decide the champions for the respective brackets.

The Powder Puff bracket will hold their Shootout on October 21, while Street Bike and Street Sedan will see their winners crowned on Saturday 25 October.

Saturday’s Street Series event will kick off with time trials from 4.30pm to 6.30pm, with racing from 7.00pm. Spectator entry is available at the gate for just $20.00 for adults and $18.00 for students with ID. Children aged 13 years and under gain free admission. For more information, visit www.willowbankraceway.com.au