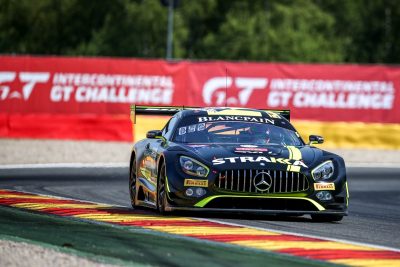 Strakka Racing announces today that it will field an increased three-car Mercedes-AMG GT3 entry for the Intercontinental GT Challenge Suzuka 10 Hours in Japan on 26 August. Strakka Racing is an official customer racing team of Mercedes-AMG.

The Pro-Am #42 car will comprise Nick Leventis, David Fumanelli and Felipe Fraga. Strakka Racing will then run two cars in the Pro class; #43 with Max Götz, Alvaro Parente and Lewis Williamson and car #44, which will be driven by Maxi Buhk, Oliver Rowland and Adrien Tambay.

The Suzuka 10 Hours will take place a month after last weekend’s 24 Hours of Spa, at which Strakka Racing’s #42 Pro-Am entry finished on the podium in second place in class, and the #43 Pro car finished 11th overall. The result saw the team move up to second in the Blancpain GT Series Endurance Cup Pro-Am team standings and saw Lewis Williamson, Chris Buncombe and Nick Leventis fill the top three spots in the Endurance Cup Pro-Am Drivers championship.

Nick Leventis, Strakka Racing Founder and Car #42 Driver: “I’m really happy that Strakka Racing is heading to Japan with a full three car attack on the Suzuka 10 Hours. Japan is a country we have history in from competing in the World Endurance Championship and also from our prior partnership with Dome so we’re no strangers to Japanese motorsport. We’re very much looking forward to competing in the biggest GT race at Suzuka and we’re aiming for top results in both the Pro and Pro-Am classes.”

Jay Davenport, Strakka Racing Director: “ Coming off the back of a very strong result in Spa, we are delighted to be able to confirm that we will be entering three cars in the Suzuka 10 Hours. This will be the first time we have competed in this particular event and we are looking forward to heading there in our first year as a customer Mercedes-AMG racing team. We have a fantastic driver line-up and we are confident of heading to Japan and securing a good result with all three entries.”