Storer steps up in speedway

Storer steps up in speedway 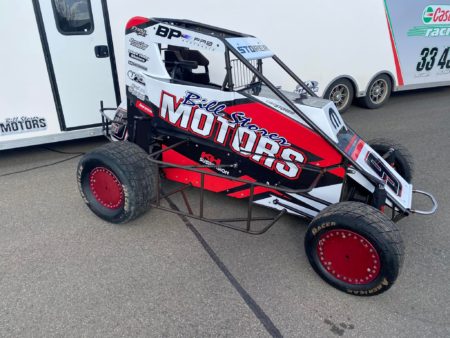 After dipping his toe in the water with the Speedcars late last season, Luke Storer is looking forward to the upcoming 2022-23 season, where he will be moving into the Speedcar ranks on a full-time basis.

Teaming up with fellow Victorian Tim Fisher, the 25-year-old from Portland, Victoria has committed to running the full season within his home state aboard the Vic # 9 Mopar powered Spike car.

“I’m really looking forward to the season ahead and the move into Speedcars is an exciting one,” Storer said.

“I had a handful of runs last season in Tim’s Speedcar and I was able to get a handle of things fairly well, as I was able to win a heat race and record a couple of top-five feature-race finishes, so that gave me the confidence to commit to the full season in Speedcars.”

Storer continued by saying that after a successful six seasons in Wingless Sprints, the time was right to grab the opportunity to run a Speedcar on a regular basis with both hands.

“There aren’t a whole lot of similarities between a Wingless Sprint and a Speedcar, so the move into Speedcars is kind of like starting from scratch again,” he admitted.

“Tim (Fisher) and the team have a lot of experience behind them, and I’m hoping that is going to allow me to progress quicker.

“When it comes to my goals for my first season in Speedcars, I just want to be consistent and try and work towards being able to run at the front of the field.”

Apart from running domestically in Speedcars, the upcoming season is going to see Storer and the team contest various interstate events.

Their first interstate trip for the season is going to be this month’s Chariots of Thunder Series double header at Darwin’s Northline Speedway in the Northern Territory on the Friday and Saturday nights of August 19 and 20 and August 26 and 27.

“Northline Speedway hasn’t run Speedcars at their track in well over 20 years, so I can’t wait to be part of the class returning to Darwin and the goal is to have consistent performances over the two weekends that I can build on for the rest of the season,” Storer said.

Around his Speedcar commitments for this coming season, Storer is aiming to step back into his family-owned Vic # 1 Wingless Sprint to contest the class’s major events that don’t clash with his Speedcar schedule.

Storer would like to thank Bill Storer Motors, Quicktime Race Shop, Mark Haby Motors, and Succession Legal for their support, as well as Tim Fisher and Fisher’s late father, Moose.