Storer goes back to back in Super Series

Storer goes back to back in Super Series

Following a few months’ break, the Indy Race Parts Super Series got back underway last Saturday night at Mount Gambier’s Borderline Speedway with round four, sponsored by BP Gambier West, and it was round three winner Daniel Storer who managed to continue his series form, once 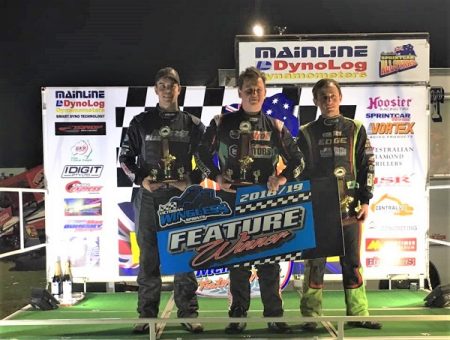 It was a flawless night for the Portland-based racer, who emerged victorious in both of his heat races to earn the pole position start for the 30-lap feature race, which he went on to lead from start to finish to clinch back to back Indy Race Parts Super Series round wins.

The night was made even more special for the Storer team when Daniel’s younger brother and the current Victorian Champion Luke Storer improved on his inside second-row starting position to greet the chequered flag in the runner-up spot.

Also improving one position during the feature race to make his way into podium contention, current Australia # 2 Luke Weel rounded out the top-three finishers.

The top-10 was completed by Mick Rigby, another South Australian in Mitchell Broome, Jeremy Beddison, Shaun Lyness and Michael McDonald, with remaining feature-race finishers including Steven Hately, Steven Loader, Daniel Kelly, who received the Indy Race Parts Hard-Charger Award after staring from the rear of the field in position 17, Robert Whiteside, Graeme McDonald and Shaun Farnsworth.

The only driver to have their race cut short was Shaun Clapp, who prematurely retired from the feature race on lap 20.

Asserting his dominance in the earlier heat races, Daniel Storer came away with two victories, with Weel and Lyness taking out first place in the remaining two heat races.

The Victorian Wingless Sprints will be back in action this Saturday night at Nyora Raceway.